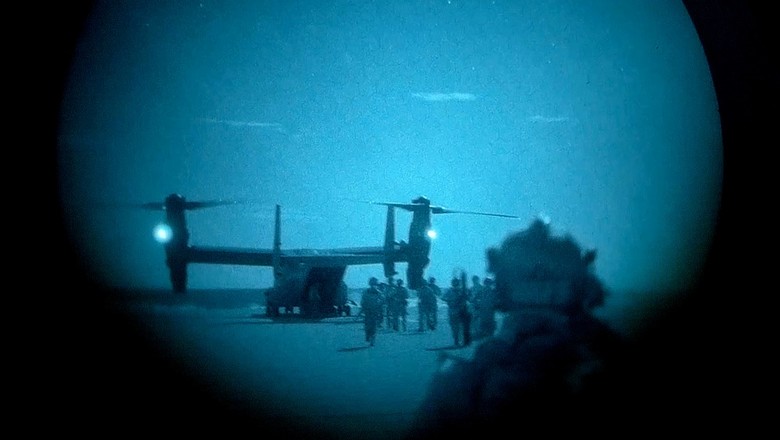 Special tactics operators led the training, which consisted of 253 participants and leveraged 40 aircraft from across Air Force Special Operations Command and Air Combat Command. One team of participants included members from the 53rd Air Traffic Control Squadron assigned to Robins Air Force Base, Georgia. The 53rd ATCS members played the role of a simulated host nation force and special tactics operators were responsible for training them on fundamental tactical skills and guiding them through a direct action training mission.

“The ST flights did a great job providing a plan of instruction in only three days to effectively integrate with the teams conducting the raids,” the special tactics officer said. “This is extremely realistic for a lot of the different partner forces we integrate with in deployed areas of operation.”

“We saw really well-rehearsed combat capability,” Guilmain said. “It was really valuable to watch how operators’ skills, both as individuals and as teams, have been refined over the months of training to provide incredible capability to the forward commanders. I’m glad we have that process in place where commanders can validate those capabilities and ensure readiness.”

Another critical readiness component teams were evaluated on was their ability to plan and carry out agile combat employment concepts. Special tactics forces have made this a priority in response to near-peer competition as well as AFSOC’s strategic guidance.

“The ability for our aircraft to operate swiftly in contested areas improves U.S. Air Force lethality and presents strategic dilemmas for our adversaries. It also helps develop procedures to habitualize AFSOC and ACC units working together in support of the Air Superiority mission.” the special tactics officer said. “Overall, despite initial planning difficulties, the exercise execution went flawlessly and according to plan.”

Editor’s note: Some names have been withheld for security reasons.