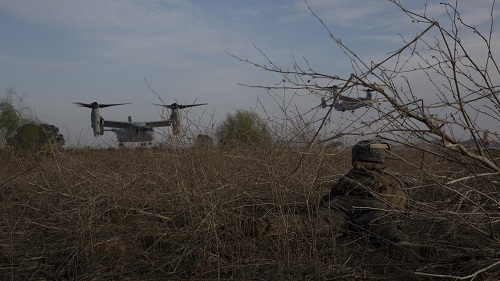 After receiving a simulated crisis response mission, Marines from elements of the SPMAGTF executed the Rapid Response Planning Process to conduct the short notice mission. Marines from the ground combat element then boarded two MV-22B Ospreys at Air Base Morón and made their way to the extraction point to execute the simulated recovery of a downed pilot.

“Our mission was to tactically recover aircraft and personnel from a potentially hostile environment and return them to friendly lines,” said 1stLt. Khalif I. Yisrael, platoon commander with the SPMAGTF’s ground combat element. “These rehearsals prepare us, as the on-call alert force, to respond to contingency operations any given time.”

During the mission, the Marines embarked aboard the aircraft, evaluated their surroundings and secured the landing area. Once secured, three teams moved to the pilot’s location and safely extracted the simulated casualty.

“[The alert force’s] job is to respond to any mission we are tasked with and ensure it is done swiftly,” Yisrael said, adding that rehearsals are necessary to maintaining proficiency of vital skills and being able to adapt to a changing environment when it matters most.

In addition to serving as practice for the Marines on the ground, the drill provides the command an opportunity to assess the unit’s ability to integrate elements of the SPMAGTF and adapt to dynamic conditions. Overall, the drill enhances the unit’s readiness for quick response to a broad range of crises, such as tactical recovery of aircraft and personnel, embassy reinforcement, support to noncombatant evacuation operations, humanitarian assistance, and disaster relief.

“These missions allow us to hone our skills as a crisis response unit and mitigate friction points,” said Cpl. Micah S. Salmon, a squad leader with the ground combat element. “The employment of each individual Marine is important in executing the missions and allows communication to flow smoothly.”

SPMAGTF-CR-AF is a self-sustained and self- deployable unit postured at Morón Air Base, giving U.S. Africa Command and U.S. Marine Corps Forces Africa a broad range of military capabilities to respond to crises in the U.S. AFRICOM area of responsibility.