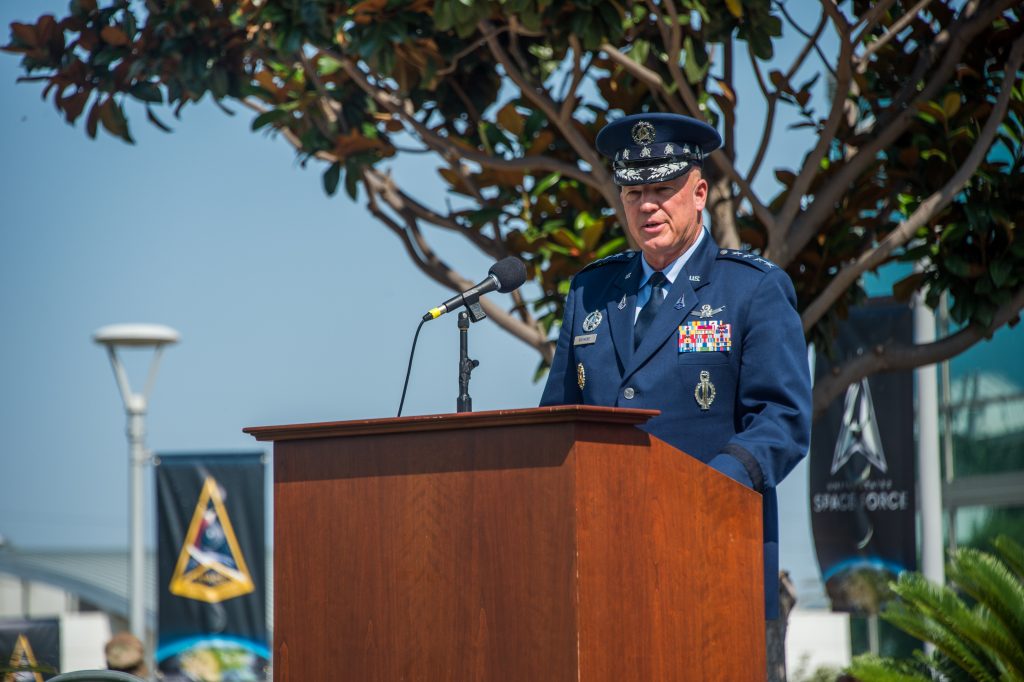 AUGUST 16, 2021 – The U. S. Space Force established the second of its three field commands in a ceremony here Aug. 13, as Space Force Lt. Gen. Michael A. Guetlein assumed command of Space Systems Command.

Speaking during the establishment ceremony, Space Force Chief of Space Operations Gen. John W. “Jay” Raymond emphasized the important work that lies ahead for Guardians and Airmen of SSC. “America relies on space, and our strategic competitors are targeting space because of this reliance and the advantage space provides,” Raymond said. “To remain the world leader and secure that advantage, we must move faster than our adversaries. The nation, as well as our allies and partners around the world, are counting on this team to deliver.”

Guetlein received his third star in a promotion ceremony earlier in the day and as the SSC commander leads approximately 10,000 military and civilian personnel, overseeing the acquisition lifecycle of 90 percent of USSF mission focus areas, controlling 85 percent of the approximately $11 billion Department of Defense space investment budget.

“Space Systems Command is about continuing the culture shift away from being service providers to being warfighters and defending our way of life from, through and in space.” Guetlein said. “In ten years, warfighting as we know it will have changed drastically and we must be postured and empowered to keep pace with this change. We cannot let this be a nameplate change from SMC to SSC. We must be bold, and we must get after the threat. It is up to Space Systems Command to counter the rising threat with game-changing capabilities.”

SSC is responsible for developing and acquiring lethal and resilient space capabilities for warfighters by rapidly identifying, prototyping, fielding and sustaining innovative, space-based solutions to meet the demands of the National Defense Strategy. SSC’s functions include developmental testing, production, launch, on-orbit checkout and maintenance of USSF space systems, as well as oversight of USSF science and technology activities.

“I am honored and humbled to be charged with the responsibility of leading Space Systems Command at this exciting time.” Guetlein continued. “I know just how much this team and this Nation are capable of, and I know we have only scratched the surface of our potential.”

SSC will also serve as the primary Space Force conduit to the Air Force Research Laboratory (AFRL) and its subordinate units that perform space science and technology functions including the Space Vehicles Directorate, Space Electro-Optics Division, Rocket Propulsion Division, and the Space Systems Technology Division. This alignment strengthens the Space Force partnership and participation in the “Two Services, One Lab” approach that ensures AFRL serves the needs of both the Air and Space Forces without duplicating functions that would come with a standalone space organization.

Guetlein previously served as Deputy Director for the National Reconnaissance Office in Chantilly, Virginia, where he assisted the director in managing the strategic and tactical operations of the NRO, and, as commander of the Space Force Element, managed all Air Force and Space Force personnel and resources assigned to that agency. Prior to that, he served as the Program Executive for Programs and Integration for the Missile Defense Agency. Early in his career, he served as the Director of the Remote Sensing Systems Directorate at Space and Missile Systems Center.

As part of the SSC establishment, the 61st Air Base Group at Los Angeles Air Force Base, California, is re-designated as Los Angeles Garrison and aligned under SSC.

No geographic moves of personnel or units are anticipated as a result of actions required in establishing this field command.