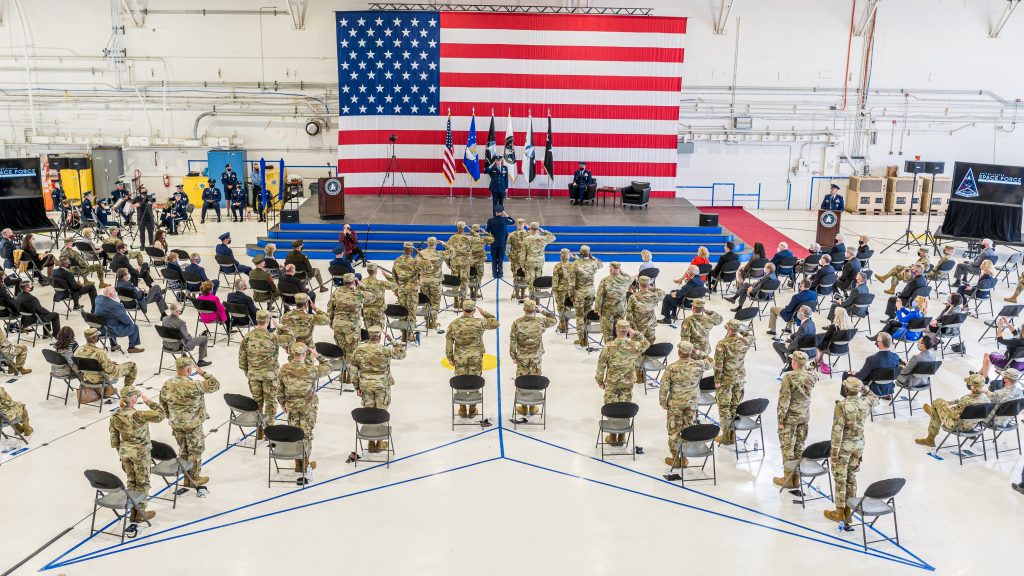 “As the primary force provider for United States Space Command, you are charged to lead space operations out of this pivot-point, to accelerate the transformation necessary to compete, deter and win a modern conflict, to prepare for war that either begins or extends into space,” Raymond said. “I’m convinced a war in space will be fought at high speeds and over great distances. We must be fast and agile, and we must focus on our primary mission, and that’s to deter that conflict from happening.”

Raymond and Whiting both talked about the decades of heritage inherited by this new organization and its role in preparing warfighters for the space domain.

“Let’s be clear: it’s the decades of faithful, dedicated, and unparalleled space operations that you, and those who have come before you, have provided which are the foundation of all our new organizations – the new armed service and combatant command alike,” Whiting said. “Our charter is to focus exclusively on generating, presenting, and sustaining combat-ready space forces – and those forces will include intelligence, cyber, space operations, and combat support elements. We are structured explicitly for the function of providing space warfighting capability.”

With the stand-up of SpOC, the Air Force unit named Space Operations Command at Vandenberg AFB, California, was redesignated as SpOC West, which retains its mission of conducting, integrating, and assessing global space operations in order to deliver combat-relevant space capabilities to combatant commanders, coalition partners, the joint force, and the nation.

“The first step in the organizational changes you are about to witness in the redesignation and assumption of command, is to recognize the inactivation of what we know today as Space Operations Command, Vandenberg AFB, the former 14th Air Force, as it transitions to Space Operations Command West,” said Col. Mark Sorapuru, the narrator for the ceremony.

“This is an appropriate time to acknowledge that what we are doing is significant. It’s history in the making today,” Raymond said. “This ceremony is about you the Space Professionals who under the Air Force Space Command and 14th Air Force flags, built the world’s best national security space enterprise.”

The 14AF was established March 10, 1943, and conducted fighter and bomber operations over occupied Chinese territory in the China-Burma-India Theater during World War II. It is credited with destroying more than 2300 enemy aircraft during the war. After standing down in 1960, it was reactivated as 14th Aerospace Force in 1968 to detect foreign missile launches and track objects in space. It moved to Vandenberg and joined then Air Force Space Command in 1993.

“With the creation of the United States Space Force, the 14 AF was re-designated Space Operations Command,” Sorapuru said. “Now, its colors are furled, and the illustrious aviation lineage and honors of this organization are returned to the United States Air Force.

AFSPC was redesignated as USSF Dec. 20, 2019, when the National Defense Authorization Act was signed into law, thereby creating the new service. AFSPC was established Sept. 1, 1982, to serve as the operational command to oversee the Air Force’s efforts in space.

“Over the ensuing years, Air Force Space Command focused on consolidating and organizing space capabilities to improve operations,” said Sorapuru. “Its first major test came in 1990-1991, when the command provided space capabilities to the warfighter during Operation Desert Storm, in what many have called the First Space War.”

After retiring the two Air Force units, the field command SpOC was officially activated, and Whiting stepped into his new positon as commander. “Sir, I assume command of Space Operations Command,” Whiting said to Raymond.

“Even as we grapple with the extraordinary challenges brought by the establishment of our new Service, the United States Space Force, and our new Field Command, Space Operations Command, you can always find grounding in this three-part focus,” Whiting said. “No matter what changes we encounter, our attention will be laser-locked on our unit, our mission, and our calling.”

The ceremony concluded with unveiling the SpOC emblem, and Bentivegna and lower echelon command teams rendering salutes to report for duty.

The garrison and delta mission commands established in July now report to SpOC.