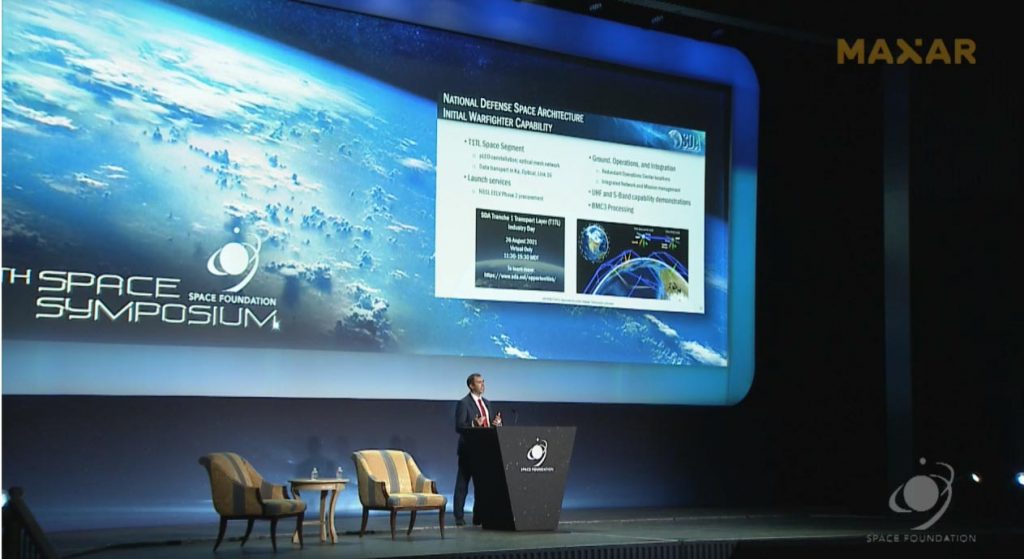 AUGUST 27, 2021 – The Space Development Agency has already started the process of transitioning from the Office of the Under Secretary of Defense for Research and Engineering to the U.S. Space Force, said the agency’s director.

The SDA, established in March 2019, will fully transition to the Space Force in October 2022, he said. “That transition has already started.”

Since 2019, the agency has been busy helping to get military satellites launched and in various orbits.

The agency doesn’t actually build, launch or control those satellites. “What we do is we take technology that’s very mature, and we field that to get the rapid capabilities,” he said.

Thus, the agency relies on industry and government partners for the development and fielding of the satellites.

The agency’s role is in streamlining the acquisition process, eliminating redundancies of effort and collecting feedback from the combatant commands as to what their needs are, he said.

The envisioned National Defense Space Architecture, he said, will consist of a layered approach, eventually featuring hundreds of satellites that can track targets such as missiles, hypersonic vehicles and other objects; provide position, navigation and timing for warfighters in GPS-denied environments; and communicate with platforms and warfighters on Earth and between other satellites.

A lot of the technology needed to get there has not yet been produced, so the SDA relies on innovation from industry, he said. The Air Force Research Laboratory, the Missile Defense Agency and the Defense Advanced Research Projects Agency have also been very helpful.

The SDA has divided the development of the National Defense Space Architecture into five two-year stages, called tranches, that will begin in fiscal year 2022. Tournear described each tranche: