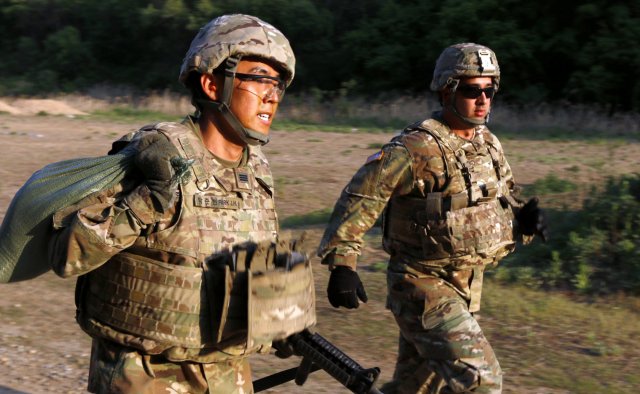 MAY 24, 2019 – As diplomacy efforts work to denuclearize North Korea, military exercises in the south are continuing on a smaller scale to maintain readiness.

So far this year, U.S. and South Korean militaries have conducted over 100 exercises, said Gen. Robert Abrams, who oversees all American troops on the Korean peninsula.

At the Pyongyang summit in September, North and South Korean leaders signed a declaration to reduce military tensions. The agreement led to buffer zones along the border and the suspension of large-scale military exercises.

“This was a prudent action in support of diplomacy,” Abrams said Wednesday at the Land Forces Pacific Symposium, hosted by the Association of the U.S. Army.

After halting the Key Resolve and Foal Eagle exercises earlier this year, the general said training has been revised in terms of size, scope, volume and type.

Every mission essential task will still be trained on, he added, but with a lower profile.

Other signs from last year’s agreement include disarming the Joint Security Area, where armed guards previously stood face-to-face along the demilitarized zone.

In early December, North and South Korean guards escorted each other through minefields on both sides of the DMZ to visually inspect 20 guard posts that were destroyed as part of the agreement.

Both nations now share video feeds from about 40 security cameras that keep an eye on the contested border.

“The JSA is completely unarmed today,” Abrams said, adding this was “unthinkable” in the past.

The confidence-building measures have significantly lowered the temperature on the peninsula, the general said.

He also dismissed the missile tests by North Korea this month as an act of aggression, saying that militaries always train on their capabilities.

“Recent activities on the peninsula by [North Korea] has not changed the palatable reduction in tension on the peninsula,” he said, “and the door for diplomacy remains open.”

Due to a turbulent history, thawing relations between the neighboring countries will require concessions and patience.

“We’ve been back and forth now since 1950,” he said, “and it’s going to take some time to build bridges, to build trust, confidence after nearly 65 years of mutual distrust and open hostility.”

Abrams, who serves multiple roles as commander of United Nations Command, the Combined Forces Command and U.S. Forces Korea, also addressed the opportunity for a South Korean leader to one day head the CFC.

The CFC, an integrated headquarters established in 1978, is responsible for planning the defense of South Korea.

In August, an assessment is expected to take place with a South Korean four-star general in charge of the CFC under the stress of simulated crisis and contingency, said Abrams, who will serve as the deputy.

Critical military capabilities belonging to South Korea will also be tested, which is one of the conditions-based requirements needed for a South Korean to lead the CFC.

Abrams and the chairman of South Korea’s Joint Chiefs of Staff plan to provide an update this fall to the U.S. defense secretary and South Korean defense minister.

“The future is bright and we’re heading in the right direction,” he said.