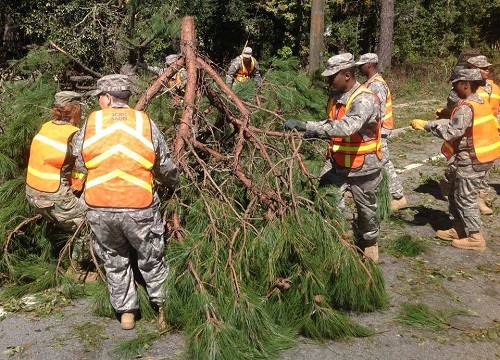 OCTOBER 10, 2016, HILTON HEAD, S.C. – The South Carolina National Guard was ready to respond to missions along the coastal region Oct. 9, 2016, in the aftermath of Hurricane Matthew.

National Guard assets were pre-positioned throughout the region in preparation for the devastation expected as the storm passed through the state. As the skies cleared and assessments were conducted, the South Carolina National Guard was there.

“When the storm was over, we woke up that morning and they put us on the road,” said U.S. Army Staff Sgt. David Roberts, 125th Engineer Company (Multi Role Bridge Company) section leader for heavy equipment operators.

Roberts added, they had been staged in the Hilton Head area earlier in the week as Hurricane Matthew was monitored. They were able to get their equipment ready for missions and were prepared to start clearing roads as soon as the storm passed.

The engineer company is working to clear the roads in Hilton Head as citizens begin returning home.

“There’s a lot of debris and but we can go over just about any obstacle…Go through it, cut through it or knock it out of the way,” added Roberts. “We’re just trying to make the roads as passible as possible.”

Other engineer units are conducting similar missions throughout the state in areas affected by the storm including Conway, Georgetown, Bluffton and McClellanville, as well as others.

U.S. Army Col. Jeffrey Jones, 218th Maneuver Enhancement Brigade commander, explained these assets were in place after experiencing their importance during the floods in October 2015.

“We were thinking ahead this year,” added Jones. “We anticipated the needs and we’re responding to the needs of the citizens in a timely manner.”