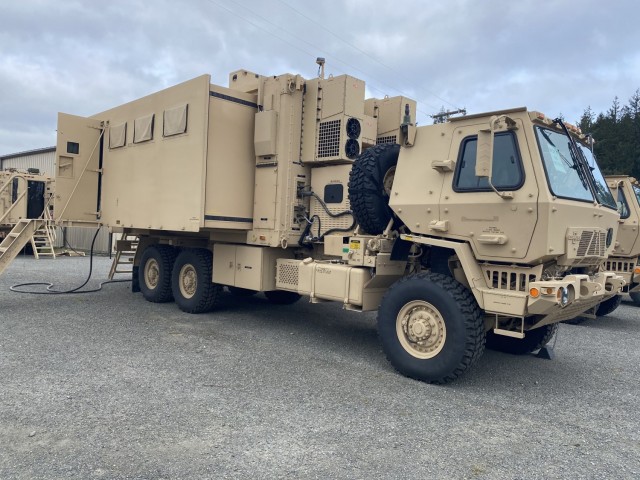 They also did a series of jump scenarios to demonstrate the CPI2 ability to be torn down, moved, and set up again quickly.

“Soldiers provided individual observations and opinions on how the system might be improved,” said Gill. “Any issues they had with the system and comments on how their organization might use the system as part of their CP were also invited.”

Currently, Army CPs at the higher commands are quite large and require a long period to set up and tear down, Shelby said.

“This all lends itself to limited survivability, maneuverability, and suitability with such a large footprint,” she said.

The CPI2 system’s goal is to use a combination of various vehicle platforms and shelter systems, which allow different levels of command posts the functionality needed while increasing survivability by being able to tear down and move locations fast, according to CPI2 Program Manager David Delgado.

“CPI2 integrates emerging technologies and capabilities with mobile mission command platforms and command post support vehicles for improved agility and survivability on the battlefield,” he said.

While the CPI2 program is in its infancy, the Product Office CPI2 is designing the CPI2 system in two increments.

Army Capability Sets are the Army’s plan to ensure the force keeps pace with advancements in network technology and the ability to deliver a modernized tactical network to Soldiers to achieve all-domain dominance over time, he explained.

Delgado said with the current assessment complete the Army will conduct further tests to balance technical maturity, integration of design, operational relevance, and affordability for a final design decision during early 2022.

“Production on the selected system will begin in FY22 for fielding in FY23,” he said.

The next phases of testing, according to DelGado, will involve units different from 2nd SBCT, so the Army gains a better perspective of how the current system design will support command post operations of the various units in today’s Army.

About the U.S. Army Operational Test Command:
OTC taps the Total Army when testing Army, joint, and multi-service warfighting systems in realistic operational environments, using typical Soldiers to determine whether the systems are effective, suitable, and survivable. OTC is required by public law to test major systems before they are fielded to its ultimate customer — the American Soldier.

OTC’s Mission Command Test Directorate tests systems for a net-centric environment that will process and transmit voice, data, messaging and video information through networks at the tactical, operational, strategic and sustaining base levels.