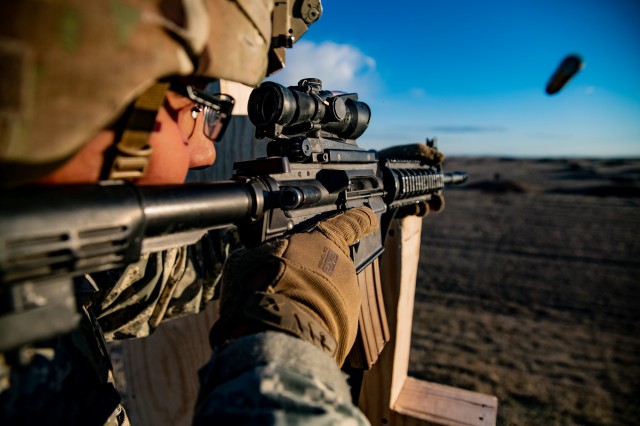 The new course has been designed to replace the Cold War-era marksmanship qualification course requiring Soldiers to engage targets faster, in a variety of firing positions they may be required to take during an enemy engagement.

“The goal of implementing a new marksmanship standard is to increase weapons proficiency in real terms; translating to combat lethality,” said 2nd Lt. Luke L. Hamann, field feeding platoon leader assigned to Headquarters Support Company. “The legacy qualification proved to be satisfactory at the tactical level in the Global War on Terrorism. However, the aim of the new qualification tables is to elicit stress, and to force the Soldier to utilize processes such as firing position transitions and magazine changes to more closely simulate combat.”

Soldiers begin the qualification in a standing position, once the Soldier engages with the first target, the Soldier is required to fire, change their position and engage with additional targets in a timely manner.

“There was an opportunity to create a fundamental change in regards to marksmanship that more closely aligns with what was done and learned over the past 10 years of combat, making it to where it fits the entire Army as a collective and makes a more proficient marksman,” said Command Sgt. Maj. Robert K. Fortenberry, head of the Infantry School’s marksmanship revamp project during an interview with Army Times.

“You’re employing your weapon system in a more tactical environment or scenario, versus the more traditional way of doing it. And by doing so, it creates additional rigor, using all of the elements of critical thinking, sound judgment, adapting to change, all of those non-tangible attributes … The clock doesn’t stop. So, you have to know – Boom! Got that exposure. Okay. I should be transitioning to the kneeling position now. Transition. There it is! – Boom! And then you’re engaging as you go.”

“The advice that we give to Soldiers when there are multiple targets is to shoot the closest target first,” said Hamann. “If that Soldier misses the close target, they reach a decision point – shoot another round at the close target, and being short ammo to have an attempt at every target; or to skip it and attempt to hit each target. In that sense, it’s not much different than the legacy qualification. I believe that the Army implemented multiple targets to elicit the critical thinking required while shooting.”

All of the information about the new course of fire can be found in the new manual, TC 3-20.40 “Training and Qualification Individual Weapons.”