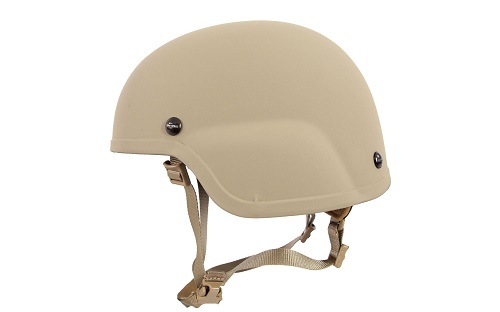 MARCH 27, 2017, WASHINGTON (Army News Service) – The Army awarded a contract Tuesday for a helmet that weighs an average of 22 percent less than the one currently in use but provides just as much protection, according to officials. The Advanced Combat Helmet Generation II contract was awarded to Revision Military in Vermont to produce up to $98 million in helmets over the next five years. The contract was mentioned Wednesday at the Senate Armed Services Committee, subcommittee on airland, during a hearing about Army modernization.

Brig. Gen. Robert L. Marion, deputy of acquisition and systems management for the Office of the Assistant Secretary of the Army for Acquisition, Logistics and Technology, told senators the helmet and other lightweight body armor items now being developed are among the Army’s most promising new technologies.

The new helmet is made from ultra-high-molecular-weight polyethylene, a lighter material than Kevlar, but reportedly just as strong. It can stop 9 mm handgun rounds, officials said, along with various shell fragments.

“The partnership between the Army and industry is critical,” said Lt. Col. Kathy M. Brown, product manager for Soldier protective equipment. “With a renewed focus on research and development, our goal is a revolutionary leap in technology for personal protective equipment in the future.”

The weight difference between the new ACH Gen II and the current helmet depends on the size, explained another PEO Soldier official. In the most common size of the helmet, a large, the ACH Gen II will weigh just under 2.5 pounds, about 12 ounces less than the current large ACH.

The most weight reduction will be in the extra-large helmet, officials pointed out. That size will see a reduction of nearly a pound.

The helmet weight reduction will help Soldiers reduce mission fatigue and enhance their situational awareness, according to PEO Soldier officials. They believe the lighter helmet will increase Soldier effectiveness and overall survivability.

The new helmet will also be available to other military services through Defense Logistics Agency Troop Support, just like the current ACH.

“The procurement of the ACH GEN II is the result of the Army’s modernization program to meet one of the Army’s top priorities — lightening the Soldier’s load,” Brown said.

Heavy, bulky body armor has been a problem for many years, said Lt. Gen. Joseph Anderson, the Army’s deputy chief of staff, G-3/5/7, who also testified at the hearing.

“We went into Iraq back in 2003 and all this stuff started getting added to us like a Christmas tree: side plates, groin plates, neck plates,” Anderson said, adding that all the protective equipment weighed Soldiers down and caused them to move almost “like robots.”

The new integrated head, neck and face protection that is now being developed is promising, though, Anderson said.

The Integrated Head Protection System will include an enhanced helmet, a visor, a mandible that protects the lower jaw, and a “ballistic applique” that can be attached over the base helmet. The complete ensemble is scheduled to be fielded in 2020.

In the meantime, though, body armor is already being fielded to better fit women and smaller Soldiers, Marion told lawmakers. Body armor is now being customized to fit the smallest stature Soldier to the biggest, he said.

“What we’ve been able to find through testing recently is that we have the same level or greater protection for up to 26 percent less weight,” Marion said of body armor being engineered at the Army’s Natick Lab in Massachusetts.

“And that’s weight that we can’t off-board to a mule or something else,” Marion said, referring to the SMET mule — the squad mission equipment transport — which is a vehicle being designed to follow along with an infantry squad and carry up to 1,000 pounds of gear.

The SMET is basically a four-wheel cart that will roll autonomously without a driver, carrying food, water, batteries and equipment for a squad, in order to reduce the weight in Soldier rucksacks, explained Lt. Gen. John M. Murray, the Army’s deputy chief of staff, G-8.

He said the Army is working with industry and attempting to lower the estimated production cost of the SMET.

Personal protective equipment is not the only armor that needs to be lightened, Murray said. The problem with upgrading armor on vehicles is that it increases their weight, he said.

“The next upgrade of the Abrams (tank) will once again increase the weight,” he said. “We’re just about reaching the limit of what we can do with the Abrams. So it is time for us to start looking for a next-generation tank.”

“For the very near term, the Abrams is still at the top of its class,” Murray said, but added there is parity out there, with other countries now fielding tanks that can compete on the battlefield.

Armored vehicles like the M1 Abrams tank and M2 Bradley are expensive to replace, so in the meantime, incremental upgrades must continue, Murray said. At the same time, new technologies must be explored for a next-generation vehicle. What he said must be found is a new technology that can significantly lighten armored vehicles, but provide the same level of protection.

“We must do both,” said Maj. Gen. Robert M. Dyess Jr. about upgrades and new development. Dyess is the acting director of the Army Capabilities Integration Center.

“There is an urgent need to modernize existing equipment,” he said, “and undertake developmental programs to replace the workhorses that have provided overmatch and have served our nation so well.”