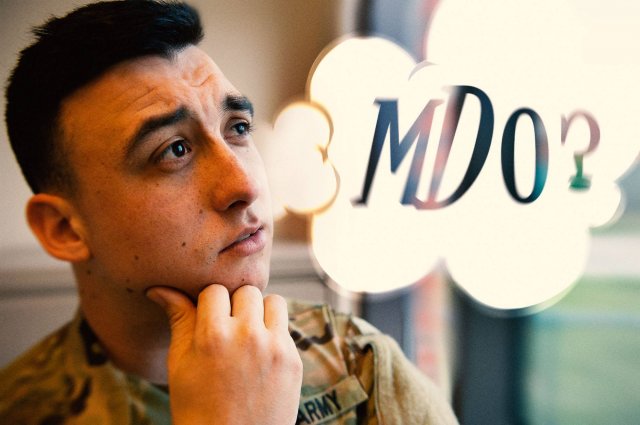 APRIL 24, 2019 – Ever contemplate how the Army’s multi-domain operations concept and modernization strategy will apply to your future career?

Likely not! Especially after spending a week in the field, grinding through training scenarios to prepare for an upcoming deployment.

Nevertheless, the MDO concept and soon-to-be released modernization strategy will bring major changes to the Army as it prepares for a future conflict against a near-peer competitor like Russia or China.

WHY CARE ABOUT MDO?
While the MDO concept has a lot of nuances, the core model describes how the Army, as part of the joint force, will solve the problem of layered standoff in all domains — land, sea, air, space, and cyberspace.

Still, to fully understand the MDO concept, some context is necessary.

Current doctrine is based on the Air-Land Battle concept, which was founded in 1981 by Gen. Donn A. Starry, who commanded the Army Training and Doctrine Command. This concept was based around two domains — air and land with phased operations in armed conflict.

“In Air-Land Battle, what did we determine? [The Army] needed to fight, outnumbered and win. Then, we needed to defeat the second echelon. It was that simple,” said Lt. Gen Eric J. Wesley, deputy commanding general of Army Futures Command and Army Futures Concept Center director.

Wars in Iraq and Afghanistan ensued, and for the past 17 years the Army evolved to counter unconventional warfare tactics, Wesley said last month during the Association of the U.S. Army’s Global Force Symposium.

At the same time, he said, the nation’s near-peer competitors flooded time and resources into research and development, and science and technology.

More importantly, the Army can no longer guarantee continued overmatch over a near-peer threat — an advantage that the U.S. has held for decades, according to Army senior leaders.

Bottom line, the Army’s vision emphasizes a need for change, Wesley said. As the MDO concept continues to be refined and updated, it will drive Army modernization, similar to what Starry accomplished decades earlier.

The concept details how the Army, as part of the joint force, continuously and rapidly integrates cross-domain capabilities to defeat adversary efforts to create stand-off.

Unlike Air-Land Battle, MDO addresses that competition and conflict occur in multiple domains (land, air, sea, cyber, and space) and that there will be multiple threats across the competition continuum in the future operating environment.

If you haven’t connected the dots — Soldiers will play a major role in this change over the next 10-15 years.

MDO CAPABLE FORCE BY 2028
The Army is determined to field an MDO-capable force by 2028, and an MDO-ready force by 2035, Wesley said. To help reach this goal, the Army plans to release an updated modernization strategy this year.

Overall, Soldiers should expect to see a lot of changes.

The new strategy serves as a “road map,” and takes a hard look at the entire Army enterprise, to include: doctrine, organization, training, material, leadership and education, personnel, facilities, and policy, or DOTMLPF-P, Wesley said.

Further, the magnitude of organizational changes Soldiers can expect over the next 10 to 15 years will be vast, he added.

To maintain dominance over our adversaries, the Army has designated six modernization priorities: Long-Range Precision Fires, Next-Generation Combat Vehicles, Future Vertical Lift, Army Network, Air and Missile Defense, and Soldier Lethality. These priorities each have a cross-functional team tasked with developing and fielding weapons and platforms with next-generation technology.

All ideas are on the table, and the modernization strategy provides Army leaders a direction to orient toward, Wesley said.

“We have resourcing beyond the magnitude of what we’ve had in years past,” Wesley said. “We have defined an opponent, we’ve identified the problems to be solved, and we have a concept that is validated.

“I think we’re postured better now than we have been in 30 or 40 years,” he added. “It remains to be seen whether we are diligent enough to execute it.”