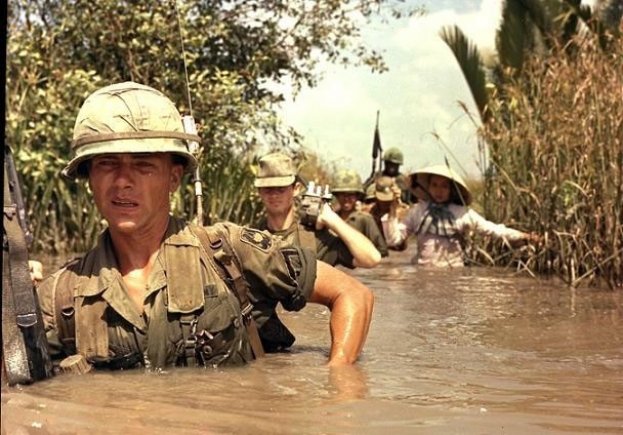 NOVEMBER 6, 2018 – Much of the excellent photography and motion pictures of the Vietnam War were captured by the troops themselves, not just by the civilian news media, said former Army Capt. William D. San Hamel.

Teams of two servicemen — a still photographer and a cinematographer — were given wide latitude to tell the stories of the Soldiers, and that usually meant going to where the fighting was most intense, said Hamel. He was in Vietnam from 1967 to 1969, at the Department of the Army Special Photographic Office, where he acted as a producer and director for the Soldiers of DASPO.

Hamel and other Soldiers assigned to DASPO spoke about their Vietnam experiences Nov. 2 at the Pentagon and displayed some of their work.

The Soldiers were not just given a lot of freedom to tell their stories through pictures, they also were allowed to go wherever they wanted and had priority seating on military aircraft, vehicles and boats as well, Hamel said.

“We were highly mobile, unencumbered by red tape, had top secret clearances, special passports, the best equipment and top-notch personnel,” he said.

ELITE GROUP BORN
Hamel explained how DASPO came into being.

In 1962, Vietnam was just a blip on President John F. Kennedy’s radar screen, he said.

Air Force Chief of Staff Gen. Curtis LeMay used to go to Joint Chiefs of Staff meetings with the president armed with slides and film footage of Vietnam, impressing and dazzling him and everyone, Hamel said.

Army Chief of Staff Gen. George H. Decker didn’t have such visuals and he didn’t like to be outshone by LeMay, so he put the plan in place to create DASPO and to fill it with an elite group of professional Soldiers.

DASPO lasted throughout most of the rest of the war, its colors furled in 1974.

GREAT RISK, NO CREDIT
While DASPO was created to gather photographic intelligence for Army commanders and senior leaders, a great deal of the pictures and films also found their way to the civilian news media and elsewhere, Hamel said.

The Army would actually hold auctions where the news media would bid on the photos and footage, he said. Unfortunately, the Soldiers who risked their lives to produce it usually received no credit and sometimes the media took the credit themselves.

And risk their lives they did. Two of them, Spc. 4 Kermit Yoho and Sgt. Charles “Rick” Rein, were killed in action, Hamel said.

Former Spc. 5 Carl C. Hanson, who served in Vietnam in 1967, said “we’d go into … territory until we ran out of film or until the battle was over.”

Hanson said that the Soldiers of DASPO never knew where their products might show up and are still surprised today to suddenly see their work appear, in his case, as the covers of two books and in three national museums.

FILMING VALOR
Former Spc. 5 Theodore “Ted” Acheson arrived in Vietnam Feb. 11, 1968, just days after the Tet Offensive began. He was wounded during a firefight near the city of Hue.

A cinematographer, Acheson said he shot 16mm film in 10- to 12-second segments. That was standard practice.

To operate the camera required him to expose his upper body from whatever cover and concealment he could find. “As I filmed the action I could hear bullets whizzing past me,” he said. “That happened a lot.”

On May 6, 1968, during a firefight near La Chu, Acheson filmed a squad of Soldiers destroying a series of enemy bunkers.

One of the Soldiers he filmed, Spc. 4 Robert Martin Patterson, received a Medal of Honor for his actions that day. It was probably one of the only films that documented the fighting that resulted in a Soldier receiving the nation’s highest award for valor, he said.

The film also shows other acts of valor that resulted in two Silver Stars and five Bronze Star medals, he noted.