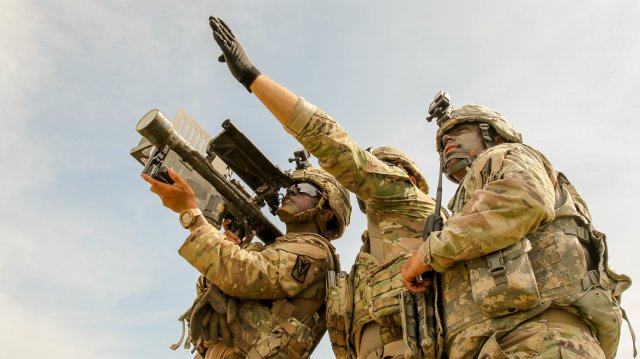 “They are a team of highly skilled individuals,” said Lt. Gen. James H. Dickinson. “They are a multi-component team, meaning that they belong to the active Army, United States Army Reserve and Army National Guard. We are a globally dispersed command. We span across 11 different time zones in 23 different locations around the world.”

Dickinson, spoke to 12 of the command’s team members during the 21st annual Space and Missile Defense Symposium at the Von Braun Center in Huntsville, Aug. 7. The team members are stationed in diverse locations ranging from the Kwajalein Atoll in the Pacific Ocean to Germany.

“This morning, I will introduce the service members and civilians who contribute to the Army and joint force space and missile defense enterprise in a series of short videos and live question and answer,” Dickinson continued. “They’ll describe their mission areas and how they contribute to the joint force. We will look at how the command develops concepts and technologies, trains forces, innovates and experiments, and accomplishes the wide-ranging space and global missile defense missions for the nation today.”

“A critical factor in keeping our overseas forces safe is the ability to provide early warning from ballistic missile attack,” said Dickinson. “The Joint Tactical Ground Stations, or JTAGS, provide this timely and potentially lifesaving capability.”

“(At JTAGS), we receive and process data in order to disseminate warning, alerting and cueing information on ballistic missiles and other events of interest throughout the theater,” Cooper said. “We run operations out of independent forward locations in Germany, Qatar, South Korea and Japan, providing 24-hour theater missile warning for combatant commanders worldwide.

“Every JTAGS operator, regardless of rank, must progress through a rigorous, multi-level certification process and spend a specific amount of time on live mission in each position,” said Cooper.

JTAGS operators receive their training through the Space and Missile Defense School located in Colorado Springs, Colorado — just one of many courses that the school offers.

Daryl Brietbach, school director, explained the school’s responsibilities, which include developing and executing training and education for the operational forces within SMDC (the 1st Space Brigade and the 100th Missile Defense Brigade); integrating space and missile defense education in training venues across the entire Army training enterprise; and developing Army space and missile defense doctrine.

“Here at the Space and Missile Defense School, we train over 10,000 Soldiers annually,” Brietbach said. “Well before a Soldier first steps into training on a new capability, the school and the community work closely with the capability developer and the technology communities in preparing to bring new and enhanced capabilities into the operational force.

“The new capability and methods of employment must be defined and written into doctrine. Doctrine is what defines and guides the Army’s use of capabilities in support of operations and delineates the techniques, tactics and procedures for operating current capabilities in the current force,” Brietbach said. “Our Soldier and leader education, training and doctrine are essential aspects of the Army’s reliance on and employment of space and missile defense capabilities.”

Dickinson said the school plays a critical role in educating and training U.S. forces, who, in turn, educate the Army on how space and missile defense can make them more lethal in combat and more effective in any operational environment.

“Today you heard directly from the trained and ready space and missile defense forces who are conducting operations around the world, and from the developers of innovative doctrine and concepts, and from the scientists and engineers conducting our leap-ahead research and development,” Dickinson said. “I hope that this quick look … provided you a greater understanding of how we provide space, missile defense and high altitude capabilities so combatant commanders have the competitive military edge … the lethality they need to fight and win today.”