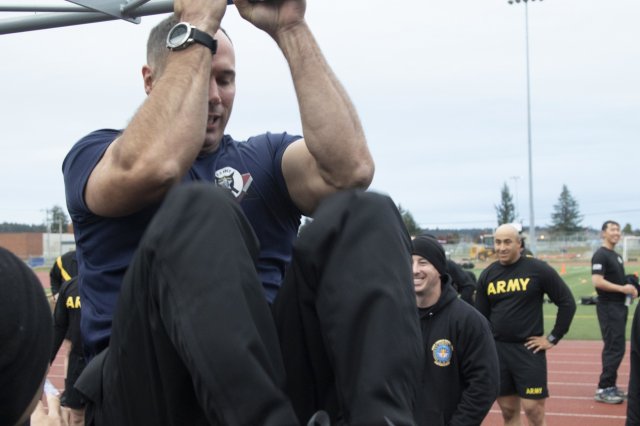 “The course validates noncommissioned officers to be level three, two and one graders in order to facilitate the pilot test the five battalions on JBLM are conducting over the next year,” said Capt. Sidney King, a Team Leader for Army Combat Fitness Test Mobile Training Team.

An ACFT is a more accurate predictor of Soldier’s ability to perform combat-related tasks and it gives commanders an idea of their Soldiers’ overall readiness, said King.

“The statistics on the old APFT indicated that it only uses about 20 percent of your muscle groups,” said Staff Sgt. Theodore Spanoudis, a squad leader with B Company, 2nd Battalion, 3rd Infantry Regiment, 1-2 SBCT. “The ACFT covers about 80 percent. It is more functional and uses more of the muscles you would be using in combat scenarios.”

The current APFT does not focus on some of the physical aspects of military life, whether it be dragging personnel or sprinting, Spanoudis added. There will probably be more workouts at the units based on working those related muscle groups, with a focus on proper form due to the new test.

It is a more total body test than the APFT, said King. It tests the six primary and four secondary components of fitness (muscular strength and endurance, power, speed, agility, aerobic endurance, balance, flexibility, coordination and reaction time) and the energy systems the body uses to move itself. The APFT did not do that.

The ACFT consists of 6 events: strength deadlift; standing power throw; hand release pushup; sprint, drag, carry; leg tuck; and a two-mile run. The entire ACFT will be conducted with a continuous clock and must be completed within 50 minutes. The specific grading approach and standards will be determined based on data collected from the field test.

One of the reasons for the grader validation requirements is to ensure Soldiers are using proper form to mitigate injuries.

“One of the goals is reducing injuries,” said Spanoudis. “You have to focus on form to prevent injuries, especially with events such as the strength deadlift, which is part of the reason for validated graders.”

During the history of the APFT, there have different standards for push-ups, depending on who is grading the test, said King. What the Center for Initial Military Training wanted to ensure was that everyone was being trained to the same standard and the test would be conducted to the same standard Army-wide.

It is going to require more time, effort, and equipment than an APFT, said King. The tradeoff is it is a more well-rounded indicator of a Soldier’s true fitness than the APFT. Units devote a lot of time and equipment into other tasks such as going to a range or jumping out of an airplane.

Why not devote the same amount of equipment, time and training toward Soldier fitness?, King continued.

“They’ve been researching different tests and this one has a lot of scientific backing to it that demonstrate its effectiveness,” said Spanoudis. “I am a big fan on functional fitness. I think it is a lot better and more interesting than what we were doing in the past and I am all for it.”