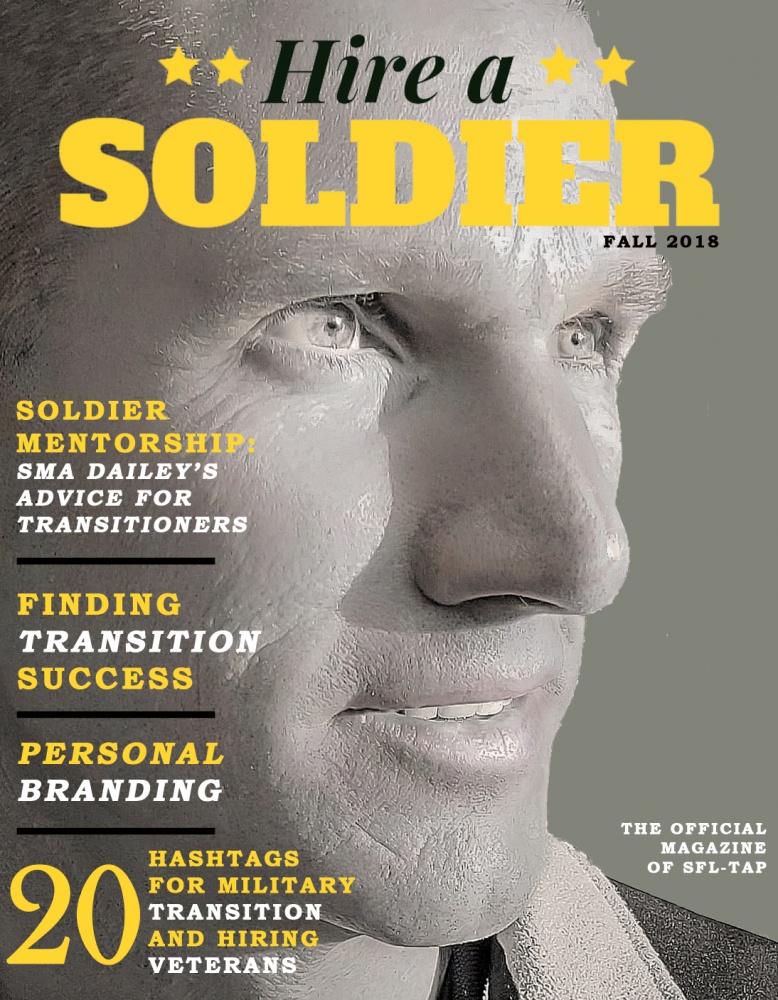 NOVEMBER 29, 2018 – The Soldier for Life – Transition Assistance Program (SFL-TAP) launched its first edition of a new Army magazine called Hire a Soldier on Nov. 29. The online publication features advice, tips, and stories for transitioning Soldiers who are planning for life after Army service.

The first edition features Sgt. Maj. of the Army Daniel Dailey and his advice for transitioning Soldiers. “At the end of the day, transition is a process and it’s something every Soldier will go through. We all must transition at some point and from every rank in the Army. There are a lot of resources out there and starting early is key to properly preparing.” Dailey said.

The magazine answers some of the most common questions from Soldiers, including personal branding, soft skills and translation, reenlistment, job search references, hiring event tips, and more. It can be read by visiting https://go.usa.gov/xP6SW.

“Transitioning can be daunting. Sharing information, lessons learned, and advice to make the process smoother is our goal,” Walter Herd, director of SFL-TAP said. “Successfully transitioned Soldiers are advocates for Army service and the more prepared we can help Soldiers become during their transition, the more successful they tend to be, which can assist in helping future Army recruiting efforts.”

Hire a Soldier originally began as a hashtag campaign launched in summer 2017 by SFL-TAP. The hashtag went viral on Twitter, resulting in Soldiers finding interview opportunities with potential employers. Since that time, transitioning Soldiers, Veterans, and hiring managers have used #HireaSoldier to tag job openings and their advice or tips for military transition.

“The Hire a Soldier campaign, and now magazine, has become much more than a hashtag,” said Jenny Hale, magazine editor and marketing contractor for SFL-TAP. “It was created to bring awareness to the civilian sector and support transitioning Soldiers in their career goals after Army service. It’s been amazing to see awareness grow with civilian companies, transitioning Soldiers, program alumni, and SFL-TAP.”