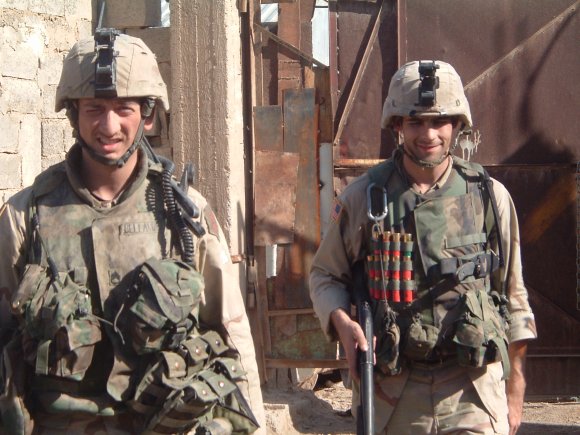 JUNE 11, 2019 – Former Staff Sgt. David Bellavia will be awarded the Medal of Honor for his bravery during some of the deadliest fighting in Iraq, President Donald Trump announced today.

A squad leader during the second battle of Fallujah, Bellavia, now 43, exposed himself to enemy fire as he defended his Soldiers on Nov. 10, 2004.

Third Platoon, A Company, Task Force 2-2 was with U.S. Marines facing about 1,500 to 3,000 insurgents who had been using the mostly abandoned city as cover. A Company learned six to eight insurgents were hiding somewhere in a block of 12 buildings, and the company would have to search each one to try and find them. After unsuccessfully searching the first nine buildings, Platoon members entered the next structure and encountered heavy gunfire from within.

The platoon then began taking fire from insurgents on the house’s rooftop. Bellavia, realizing the only way to keep his platoon from taking casualties was to eliminate the enemy, re-entered the house.

The intensity of the situation and the close combat that followed shocked Bellavia, who had limited experience with enemy contact at the time.

“Never in my life had I seen anything like that,” he said of the fighting.

Bellavia called for an M2 Bradley Fighting Vehicle to provide suppressing fire with its 25 mm cannon as he headed inside. He then fought his way up three floors, using his rifle and grenades to kill four enemy insurgents and mortally wound another. The first insurgent Bellavia killed had been loading an RPG launcher to fire upon Third Platoon. Bellavia’s actions ultimately saved three squads of Third Platoon.

For his actions during the firefight, Bellavia received the Silver Star. His other commendations include the Bronze Star and the New York State Conspicuous Service Cross.

The native of Waterport, New York, grew up listening to stories from his grandfather, a World War II veteran who still resides in the area. He became enamored with the military life at a young age and at 23, he left college and enlisted in the Army in July 1999.

Bellavia left active duty in 2005 and currently hosts his own radio show in the Buffalo, New York area. He is also the co-founder of Vets for Freedom, a conservative political advocacy organization.