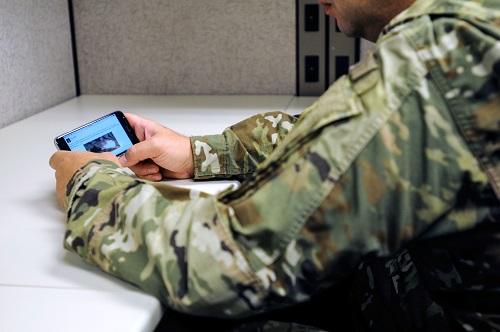 That policy doesn’t apply just to the way Soldiers conduct themselves in the real world, said Maj. Gen. Jason Evans. It also applies to how they conduct themselves online, such as in emails, online chats, instant messaging, blogs, social media sites and web or video conferencing.

Evans, who serves as director of Military Personnel Management within the Army G-1, was on Capitol Hill, Wednesday to discuss the Army’s policies on social media with the House Armed Services Committee, subcommittee on military personnel.

“Harassment, bullying, hazing, stalking, discrimination, retaliation, and any type of misconduct that undermines dignity and respect will not be tolerated,” Evans told lawmakers. “And those found in violation will be held accountable.”

Back in 2015, then chief of staff of the Army Gen. Ray Odierno attended a Sexual Harassment/Assault Response and Prevention summit in Washington, D.C, where he learned that Soldiers were reporting sexual harassment via social media. Other Soldiers spoke about online retribution against Soldiers who had spoken up about sexual harassment and sexual assault.

The next month, Odierno convened a team to address the issue and find a way to respond to and prevent such behavior online.

That team outlined three lines of effort that include updating existing Army policies to reflect social media, updating training materials and infusing the training base with information and best practices, and sharing information regarding responsible online conduct.

The Army released an All Army Activities message in July 2015, and then re-issued it in February 2017. It required commanders to “reinforce a climate where current and future members of the Army team … understand that online misconduct is inconsistent with Army values, and where online incidents are prevented, reported, and addressed at the lowest possible level.”

Also in that ALARACT, the Army first introduced the “Think, Type, Post” mantra to help Soldiers practice appropriate and responsible conduct while online.

Evans told lawmakers that Soldiers now receive training on online conduct as part of equal opportunity and Sexual Harassment/Assault Response and Prevention training. That training is included as part of the coursework at all levels of professional military education, from initial entry training to pre-command courses.

“Thereafter, that training is required on an annual basis,” Evans said, responding to one lawmaker’s question about the frequency of such training.

To share information across the Army about responsible online conduct, Evans told lawmakers, the Army has developed a social media handbook that outlines proper online behaviors and responsibilities and includes a “best practices” section on protecting oneself and reporting online misconduct.

Evans also told lawmakers about the Army’s “Not in my squad” effort, which he said was designed to help Soldiers assess the state of mutual trust and cohesion within their squads.

The ‘Not in my Squad’ campaign, he said, “facilitates leader involvement and accountability, and aids in the creation of a professional and ethical culture among members of the Army team.”

Evans also assured lawmakers that the Army is aware of the dangers of social media, and their capacity to serve as a forum for the kind of inappropriate behavior that is already known by most Soldiers to be unacceptable in person.

“The Army recognizes the potential dangers concerning social media, and is proactively working to ensure Soldiers are aware of the standards of conduct and policies, training and programs,” he said.

“We will continue to enforce standards and imbue Soldiers and Army civilians with Army values, and emphasize professional behavior in all that we do.”