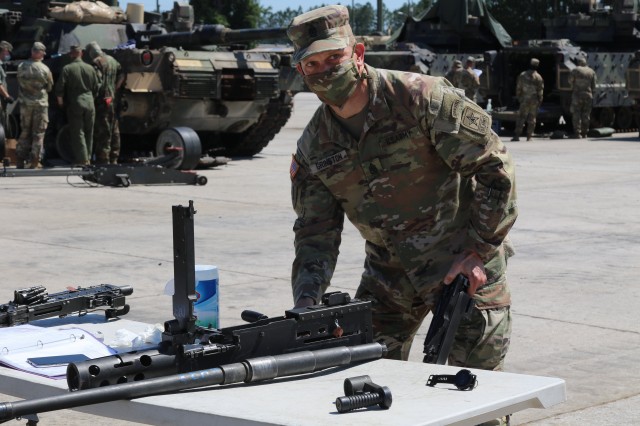 MAY 7, 2020 – The Army’s top enlisted leader held a virtual town hall Tuesday to provide an update on training, military education and the delivery of new uniforms, as the service continues to shift within the COVID-19 environment.

Before the town hall, Sgt. Maj. of the Army Michael A. Grinston said he had the opportunity to view how the 3rd Infantry Division has been able to train with safety measures in place, such as the use of masks and physical distancing.

During his visit, he saw firsthand Soldiers with the 1st Armored Brigade Combat Team training inside a gunnery simulator and a motor pool as they prepare for an upcoming gunnery range.

“This is going to be the model for how we get units back to training at some point,” Grinston said. “This will take some time, but I’m confident in everything I saw today that we are not going to put the force in [an unsafe situation].”

Leadership courses
Delays in professional military education courses have also affected many noncommissioned officers looking to move up in the ranks.

Once students arrive, he said they will likely be placed in quarantine for a brief time to ensure they are not infected with the virus.

The PME requirements for Soldiers eligible to be promoted to staff sergeants and sergeants first class have also been temporarily suspended starting May 1.

“Before you had to be complete either your advanced leadership course or your senior leadership course,” Grinston said. “We waived that and those folks are getting promoted without the professional military education requirement.”

On June 1, Grinston said the Army will review the suspension to determine if it should be extended. Soldiers will still be required to complete the course at a later date and will be prioritized first in the training pipeline to ensure they meet this training requirement.

The Army, though, has still been able to virtually conduct the basic leaders and master leaders courses.

In July, the Army plans to restart in-residence training for recruiters and drill sergeants, after they complete a distance learning phase.

“Again, we’re looking at these schools on a case-by-case basis,” he said, adding it will depend on the current Defense Department’s stop-move order, which has been extended to June 30.

Even if NCOs cannot attend courses, they can still be leaders to their Soldiers through virtual means when they are not allowed to meet in-person.

He suggests leaders use social media or other video chat options to actually see the face of their Soldier versus a text message.

“Face-to-face still matters,” he said. “We’re just going to have to do that virtually.”

New uniforms
While masks and gloves have now become an impromptu uniform item, the Army has seen a slight delay in rolling out its new Army Green Service Uniform.

A throwback to an iconic World War II uniform, senior leaders have previously said the Army Greens aim to instill pride in Soldiers and give them a professional appearance in the office or while out in public.

But with manufacturing delays and fabric material being diverted to producing masks in the COVID-19 fight, the uniform’s delivery is about a month behind schedule.

Soldiers in basic combat training will now be tentatively issued the uniform in August, while at the same time it will be available to purchase at certain locations.

“We will get those out to the force as soon as we can,” Grinston said.

While the uniform is currently being sold at certain locations, the uniforms quickly go off the shelves, he said.

“We’re looking to expand that,” he said. “But like most things that make material, it’s coming a little bit slower than we anticipated right now.”

Understanding the overall frustration spurred on by the pandemic, Grinston ended the town hall by thanking Soldiers for their patience during this uncertain time.

“It takes a strong Army family [and] we’re extremely proud of everybody,” he said. “We’re going to get through this and we’re going to be better than when we started.”