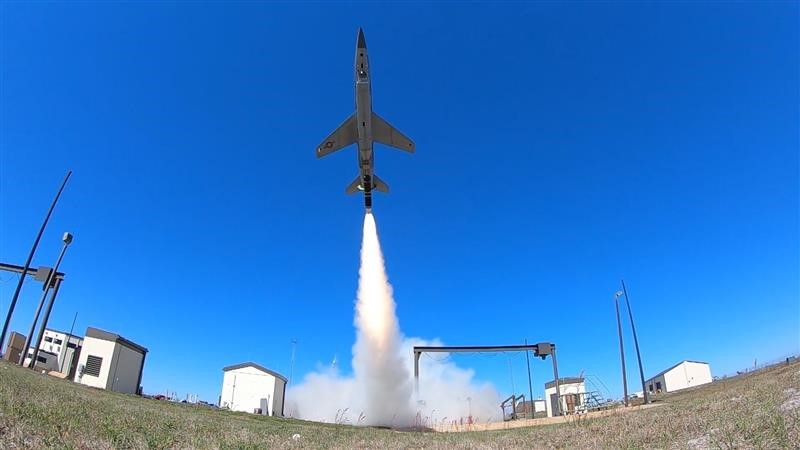 MAY 6, 2021 – The Skyborg leadership team conducted a 2 hour and 10 minute flight test of the Skyborg autonomy core system, or ACS, aboard a Kratos UTAP-22 tactical unmanned vehicle at Tyndall Air Force Base, Florida, April 29.

Termed Milestone 1 of the Autonomous Attritable Aircraft Experimentation, or AAAx, campaign, the ACS performed a series of foundational behaviors necessary to characterize safe system operation. The ACS demonstrated basic aviation capabilities and responded to navigational commands, while reacting to geo-fences, adhering to aircraft flight envelopes, and demonstrating coordinated maneuvering. It was monitored from both airborne and ground command and control stations.

“We’re extremely excited for the successful flight of an early version of the ’brain‘ of the Skyborg system. It is the first step in a marathon of progressive growth for Skyborg technology,” White said. “These initial flights kick off the experimentation campaign that will continue to mature the ACS and build trust in the system.”

Milestone 1 is the first step in testing the ACS and begins a sequence of experimentation events planned over the next several months.

“Through this operational experimentation campaign, AFRL is leaning forward to get early engagement with the warfighter to deliver a suite of full-mission autonomy on a relevant timeline,” Pringle said. “AFRL is proud to be developing this force multiplier for the U.S. Air Force with our partners at PEO Fighters and Advanced Aircraft and the 96th Test Wing.”

The 96th Test Wing is well-positioned to integrate and test emerging technologies like autonomy on various platforms (aircraft and weapons), and has provided critical infrastructure support and test expertise to Skyborg. Milestone 1 was the first time an active autonomy capability was demonstrated on an Air Force test range, and is a first step to integrating these aircraft into a complex operational environment.

“As we have throughout our history, the test enterprise is adapting our people and capabilities to support this rapidly maturing technology, and the execution of this flight test is a great milestone for our closely integrated development and acquisition team. Safely executing this test and providing the knowledge needed to advance the technology is at the heart of what we do. And as always, we’re highly motivated to help bring war-winning technology to the next fight,” Cain said.

The aim of the Skyborg Vanguard program is to integrate full-mission autonomy with low-cost, attritable unmanned air vehicle technology to enable manned-unmanned teaming. Skyborg will provide the foundation on which the Air Force can build an airborne autonomous ‘best of breed’ system of systems that adapts, orients and decides at machine speed for a wide variety of increasingly complex mission sets.