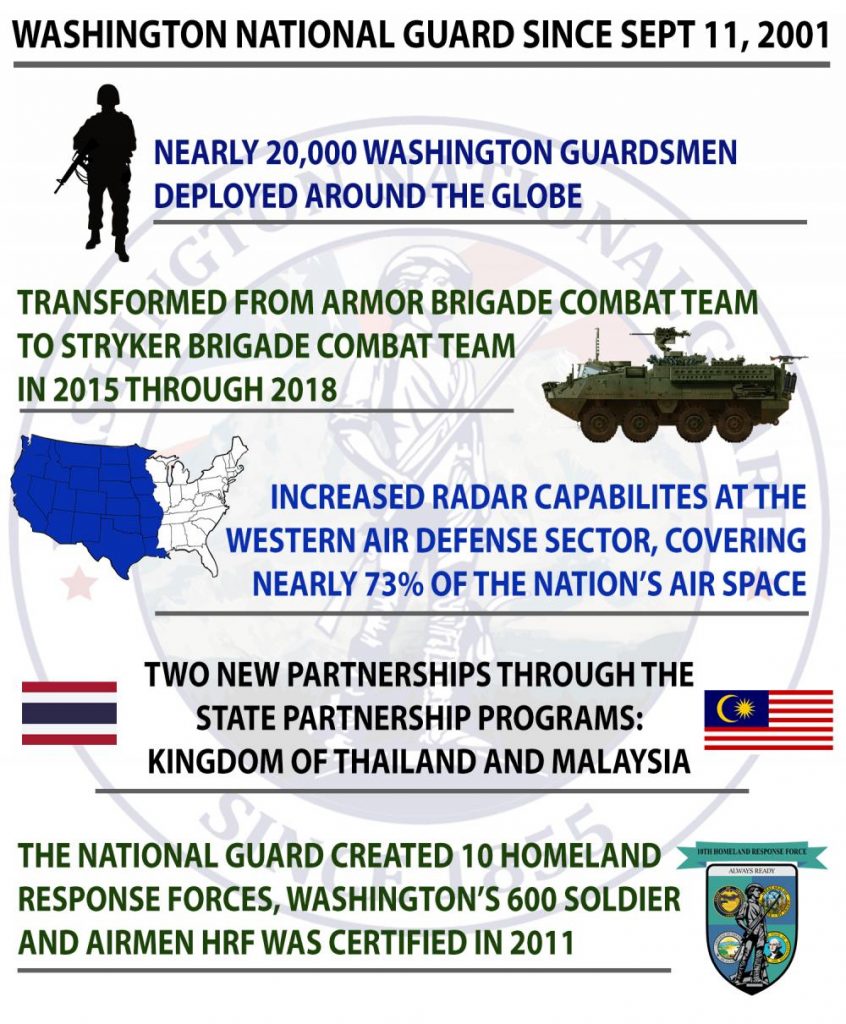 Following the worst terrorist attack on U.S. soil, more than 200 Washington National Guardsmen deployed to airports across the state. Their mission was to assist with the security of air travel, helping restore the faith of travelers after two commercial airliners flew into the World Trade Center, one crashed into the Pentagon, and another went down in Pennsylvania on Sept. 11, 2001.

“This deployment was critical to rebuilding public trust in our air travel system and giving them a sense of security again,” said Maj. Gen. Bret Daugherty, the adjutant general, Washington National Guard.

Since concluding that mission nearly 20 years ago, the Washington National Guard has excelled and transformed, building a more modern organization for an uncertain future.

While Guardsmen assisted at airports, Information Operations and Special Forces teams began deploying to Afghanistan. By the end of 2001, nearly 300 guardsmen were deployed in support of operations directly related to the attack.

The 20 years to follow would see nearly 20,000 Washington National Guard airmen and soldiers deploy around the globe in support of multiple operations to enhance national security and defeat terrorism.

Recently Gen. Daniel Hokanson, chief of the National Guard Bureau, highlighted how the overseas deployments that followed triggered a “seismic change” for the National Guard, taking it from a strategic reserve to an operational force.

“This shift made us better trained and equipped and better integrated with the Joint Force,” Hokanson said. “Today’s National Guard is the most professional force in our nearly 400-year history.”

“This was a huge win for the state of Washington and our Army National Guard,” said Daugherty. “It set up the 81st Brigade to play a critical role in the expanded mission of the Army and we are seeing that now with our deployments to Poland and Ukraine.”

Another piece of the expanded overseas reach of the National Guard was the increase of the State Partnership Program. Started in 1991 as a joint contact team program in the Baltic Region with Reserve component soldiers and airmen, SPP has evolved from less than 30 partnerships prior to 2001 to 82 partnerships with 89 nations around the globe, focused on building relationships through military-to-military engagements.

The Washington National Guard became a key participant in the State Partnership Program, establishing formal relationships with two critical Indo-Pacific Command nations, the Kingdom of Thailand in 2002 and Malaysia in 2017.

“We have two amazing partnerships with the Kingdom of Thailand and Malaysia,” said Daugherty. “The relationships our Guardsmen are making is mutually beneficial in achieving the goals for both nations.”

While operations overseas ramped up, the defense of the nation became a top priority for the Department of Defense, and the first thing it looked at was the radar systems used by the Western Air Defense Sector.

“Prior to the September 11 attacks, we used to just look outward, we never looked within,” said Daugherty. “We knew we had to modernize our organization to ensure the safety and security of our skies.”

By the end of 2005, the outdated Q-93 radar system was replaced with modernized computer systems (Battle Control System-Fixed), which was a major shift in how the U.S. was defending air space since 1983. The Western Air Defense Sector also assumed responsibility of more airspace shifting from down the center of the U.S. to east of Mississippi, totaling roughly 73 percent of the total U.S. airspace.

The tragedies of 9/11 also highlighted the importance of being proactive in preparation for an efficient and effective response. In 2011, the Department of Defense directed the National Guard to create 10 Homeland Response Forces, with the focus on providing life-saving capabilities, decontamination, emergency medical, security, and command and control following major disasters. Certified in 2011, the Washington National Guard was the second state to stand up a Homeland Response Force, responsible for assisting with major disasters in FEMA Region 10, which includes Washington, Oregon, Idaho and Alaska.

“Being ready for any event, but most importantly one that can expose Washingtonians to dangerous materials, is important,” said Daugherty. “The structure has proven to be critical responding to the State Route 530 Landslide in Oso and during the state’s COVID-19 pandemic response.”

As the past two decades have modernized and transformed the Washington National Guard, the future of the force continues to adapt to the needs of today’s world.

“We are always growing, expanding our mission, creating a force for the future to support missions both overseas and here in the states,” said Daugherty. “We have to learn from our past to prepare ourselves for what the future may bring.”