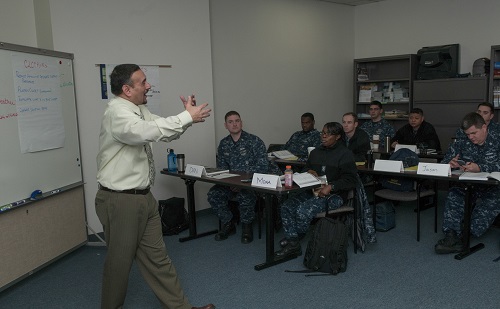 The course’s goal is to prepare FC/Es to accurately explain BRS and the differences with the current “High-3” military retirement system to Sailors, as well as provide accurate information to enable Sailors to make informed decisions about their retirement options. Counselors and educators can also take the information and integrate it into financial planning processes and procedures.

Under BRS, members who leave the military before earning a retirement pension take with them their TSP account, including government contributions after completing two years of service. Additionally, BRS allows enrolled members who earn a retirement pension the ability choose to receive a portion of their pension in a lump sum in exchange for a reduced retired pay until reaching full retirement age.

This is the second of four targeted education courses being developed and deployed to provide service members the information they need to make informed choices on BRS. The first training for leaders was released in June on JKO and Navy e-learning. In early 2017, a course for those eligible to opt-in to BRS will be released. The fourth course, for those new to the Navy, will provide a comprehensive look at the components of BRS and will be released January 2018.

In an effort to facilitate a smooth transition to BRS, all Navy service members will be required to complete either the BRS Leader’s Training course, which is now available on JKO and Navy e-learning or the BRS Opt-in Training course which will go live early in 2017.

Active component Sailors who joined the Navy after Jan. 1, 2006, but before Jan. 1, 2018 will have the choice to enroll in, or opt-in, to the Blended Retirement System or remain in today’s current retirement system. Reserve component Sailors who have less than 4,320 retirement points as of Dec. 31, 2017 have the same choice to opt-in to the Blended Retirement System.

Command pass liaisons have been tasked with ensuring all command members have updated email addresses in Navy Standard Integrated Personnel System (NSIPS) to facilitate BRS eligibility notifications. More information on opt-in eligibility will be announced in a future NAVADMIN.

All members serving as of Dec. 31, 2017, are grandfathered under the legacy retirement system. No one currently serving will be automatically switched to BRS.

Along with the training courses, Department of Defense is developing an online calculator for Sailors making the opt-in decision to see the impact of both systems will make on their future finances.

The PFC-E course can be found on JKO, CAC required, at https://jkodirect.jten.mil/html/COI.xhtml?course_prefix=J3O&course_number=P-US1331/ then search for course US1331 and on Military OneSource, no CAC required, at www.militaryonesource.mil, under Financial and Legal then click on Service Providers and Leaders.