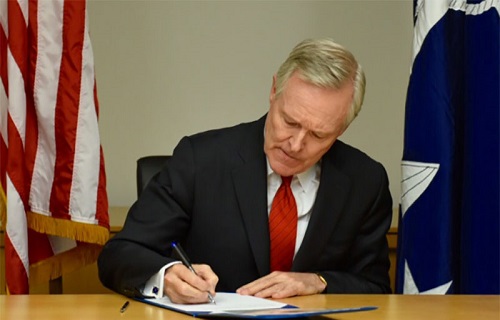 JUNE 2, 2016, NEW YORK (NNS) – To protect Sailors and Marines suffering with post-traumatic stress disorder (PTSD), traumatic brain injury (TBI) or any other diagnosed mental health condition, Secretary of the Navy Ray Mabus has made his department the first in the military to assure such conditions are considered before separating a service member.

Previously a service member’s misconduct took precedence over diagnosed mental health conditions when considering separation, which impacted the veteran’s ability to receive benefits. Now, if it contributed to the misconduct, the medical condition will take precedence.

Effective immediately, Sailors and Marines being processed for any type of involuntary administrative separation (ADSEP) who have a diagnosed mental health condition may be referred into the Disability Evaluation System.

Additionally, if the Sailor or Marine is being administratively processed under provisions that authorize a characterization of service of other than honorable, the case must be referred to the first general officer/flag officer in the chain of command for a final determination. Any service member previously separated under similar circumstances may also petition to have their discharge reviewed through either the discharge review board or Board for Correction of Naval Records (BCNR).

“It is one of the great maxims of naval history that Sailors and Marines are the sea services’ greatest advantage and most important asset. For more than a decade, we’ve asked a tremendous amount of our people and their families,” Mabus said. “In turn, we have a responsibility to support their needs, whether they are serving the Navy and Marine Corps mission around the globe or transitioning from uniformed service to civilian life.”

Mabus signed the new policy into effect during a visit to the Steven A. Cohen Military Family Clinic at the NYU Langone Medical Center, a Cohen Veterans Network (CVN) clinic in New York.

CVN describes its mission as striving “to improve the quality of life for veterans and their families, including Guard and Reserve, by working to strengthen mental health outcomes and complement existing support, with a particular focus on post-traumatic stress.”

“Keeping faith with veterans under all circumstances is our solemn vow,” said Mabus. “It is vitally important to address those service members whose separation is a result of PTSD/TBI.

Mabus later in the day formally announced the policy signing at an event hosted by the Veterans on Wall Street (VOWS) initiative.