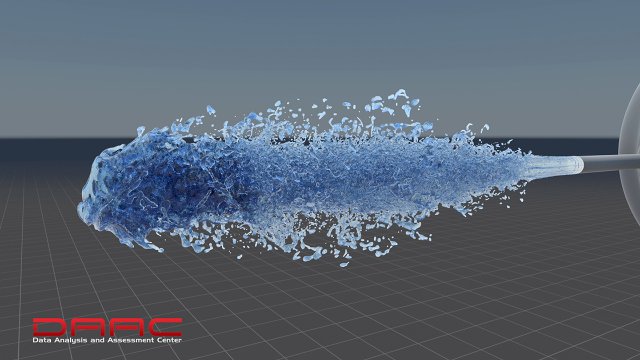 “The simulation captures the spray primary atomization in the near nozzle dense region using a realistic complex diesel injector,” Bravo said. “As diesel sprays are mostly optically thick, the measurements in the dense region are restricted, and the present simulation provides a novel diagnostic method.”

As a research mechanical engineer with the U.S. Army Research Laboratory, Bravo is the principal investigator for a five-year Department of Defense Frontier project called, “Peta-scale High-fidelity Simulation of Atomization and Spray/Wall Interactions and High-temperature and Pressure Conditions.”

Bravo said researchers conduct concurrent studies in well-controlled laboratory facilities using high-speed video imaging; however this is the first time in the Army that we’ve created a high-resolution 3-D simulation of the diesel injection process with this level of precision. This precision requires access to state-of-the-art distributed memory parallel computers and millions of CPU hours, only possible with Frontier resources.

When the team started, there was not a visualization functionality to export the geometry of the datasets to a format that could be used efficiently in their specialized software program, Bravo said.

Computer visualization scientists from the Data Analysis and Assessment Center, known as DAAC, helped develop a unique pipeline to work around the issue, exporting the data in one format and then converting it to another.

“It created much higher quality renderings of the data revealing important process insights,” he said. “Using this tool, our animators were able to smooth out the normals and use ray tracing technology on the surface of the spray geometry to capture the realistic attributes of liquid.”

“The simulation used 80 million cell nodes, distributed over 5,000 processors, generating petabytes of information,” Bravo said. “The simulations allow us interrogate the spray process in ways that were not previously possible, while revealing critical insights about its behavior. The bottom line is that the enhanced simulation and visualization capability, enabled by our DAAC collaborators, is helping us solve critical Army bottlenecks and accelerating the development of next generation engine platforms.”