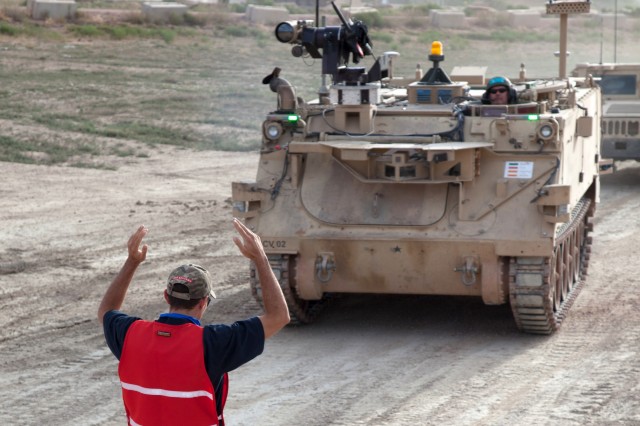 Coffman, director of the Next-Generation Combat Vehicle Cross-Functional Team, praised the capabilities of the four robotic combat vehicles, or RCVs, during the platoon live-fire exercises here.

Soldiers from the 4th Infantry Division used two modified Bradley Fighting Vehicles, called Mission Enabling Technologies-Demonstrators, or MET-Ds, to control and maneuver the RCVs to determine whether the autonomous vehicles increased the lethality and efficiency of ground units.

“The ability [to spot enemies] was exceptional, because that reduces the risk on our Soldiers and allows us to remain in a covered and concealed position and make decisions,” Coffman said during a media conference call Thursday.

The MET-Ds, which are manned with six Soldiers, have 360-degree situational awareness cameras, a remote turret with a 25 mm main gun, and enhanced crew stations with touchscreens. The RCVs are M113 surrogate platforms that also have 360 cameras and fire 7.62 mm machine guns.

From inside the MET-Ds, Soldiers were able to control the RCVs up to a 2,000-meter range, but struggled to extend that distance in dense forest regions, Coffman said.

Developers plan to add more features to the vehicles in Phase II of testing, including a new radio tether to increase the operating range, an unmanned aerial vehicle and a target recognition capability based on synthetic data. Phase II, which is scheduled for the first quarter of fiscal year 2022 at Fort Hood, Texas, will feature three platoons of robotic vehicle with control vehicles.

“This is about commanders on the battlefield and giving them more decision space and reducing the risk on our men and women,” Coffman said. “We go into the nastiest places on earth. And these robots are absolutely going to do that in the future. We’re not there 100% yet.”

A third party will evaluate the technical and tactical performance of the operating crews and robotic vehicles, as well as the overall success of the experiment. The findings will then be briefed to the service’s senior leaders.

After the evaluation of Phase II’s results, Coffman said the Army will decide whether to continue testing.

Room for improvement
Soldiers testing the autonomous vehicles noted that greater sensory capabilities must be developed for the controlled vehicles to serve as unmanned replacements.

“Right now we don’t have sensors that can tell whether we’re coming across a little puddle that we can just drive through or whether that puddle is 8 feet deep and going to bog us down,” said Jeffrey Langhout, director of the Army Combat Capabilities Development Command’s Ground Vehicle System Center. “A robot can navigate its own way and it relies on the sensors that it has to keep from driving into ditches and all kinds of problems. We certainly have a long way to go on that.”

Sgt. Matthew Morris, assigned to 3rd Armored Brigade Combat Team, 4th ID, said the lack of downward visibility hindered operation of the RCVs. He said the vehicle’s ability to see down steep terrain must improve to prevent the vehicle from overturning.

When a human drives a vehicle into soft sand they instinctively know to shift to a lower driving gear and the RCVs must develop that sensitivity, Coffman said.

“For me specifically, I think that the ability to see downward once we approach certain inclines and declines would probably be an astute upgrade that would push us forward in the right direction,” Morris said, adding the vehicles must increase its audio signature to increase communication abilities with crew members.

Vehicle operator Sgt. Scott Conklin, who is also with 3rd ABCT, said that the two-person crew could handle the increased workload, but the frenetic pace of operating with the 360 cameras made the RCVs challenging to operate.

Coffman said regardless of how the program evolves, he said humans will retain a level of autonomy over the robotic combat vehicles.

“We don’t want a fully autonomous vehicle,” he said. “We don’t want the machine deciding. We want very specific rules of what that machine will and will not do. The humans are in charge.”