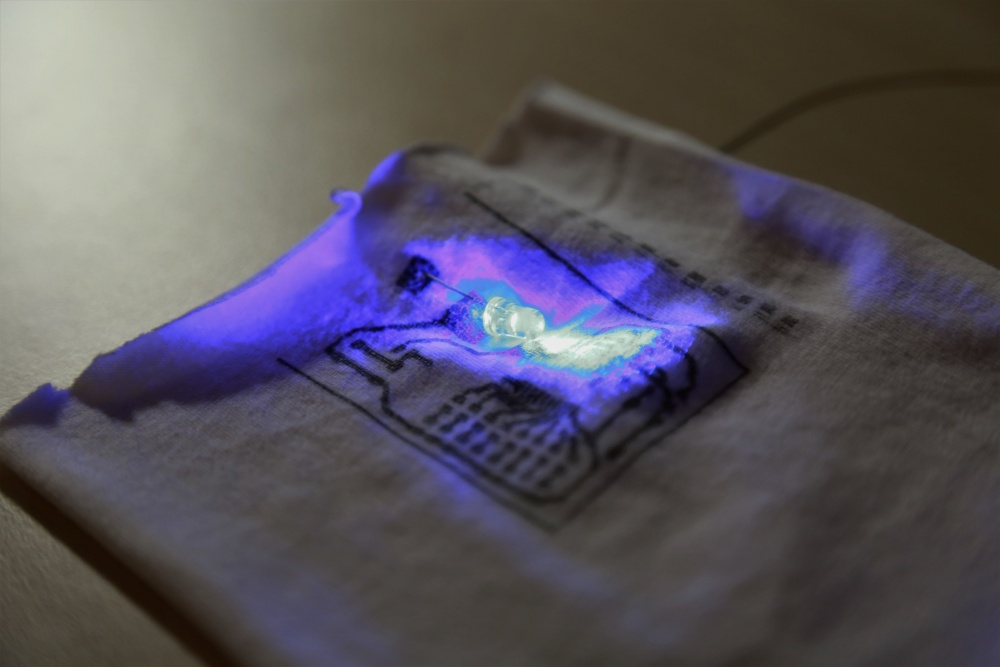 “This project is based upon Dr. Wang’s research published in the scientific journal American Chemical Society Applied Materials and Interfaces, where he relayed how light-emitting diodes (LEDs), in conjunction with photosensitive dyes, could be used to enhance the degradation of chemical warfare agents like mustard gas,” Landers said.

Chemical weapons like mustard gas (HD) have been a part of warfighting for over a century. Their use has increased over the last two decades both in warfare and in focused assassinations and attempted assassinations. Enhancing warfighter safety by detecting chemical warfare agents and decontaminating items that come in contact with them is an ever-present focus of the CCDC Chemical Biological Center.

In addition to the work published by the American Chemical Society, the pair also entered Wang’s research into the Center’s Innovative Development of Employee Advanced Solutions (IDEAS) Program designed to give researchers with promising new ideas seed money to develop them. It was one of eight projects chosen from a field of 17 to receive funding.

The LEDs work by way of photocatalysis, meaning the light starts the chemical reaction necessary to break down the CWA.

Wang and Landers’ work with boron-dipyrromethene (BODIPY), an organic compound that acts as a photosensitizer – a molecule that brings about a chemical change in another molecule (decontamination of the HD molecule in this case) in the presence of light.

“The LED initiates the reaction, activating the dye-like BODIPY and the BODIPY, when exposed to LED light, converts the nearby oxygen to a more reactive form,” Wang explains further. “It’s that reactive oxygen that breaks down the chemical agent. It all begins with the LED.”

Because warfighter safety often relies on stealth, Wang and Landers realized that light emitted from LEDs would need obscuration.

“Instead of taking an LED and applying it to the surface of clothing, we will incorporate small LEDs with an ink jet-printed circuit between layers of a uniform allowing the LEDs to safely activate if a warfighter suspects an agent threat,” Landers said.

Wang and Landers solution to masking the light emissions will use conductive silver inks to affix the ink-jet printable circuits and LEDs to one layer of fabric and then cover them with a light-obscuring material.

“Both layers are breathable, and that’s one of the main goals of this project – to make a self-decontaminating fabric that’s still breathable and reduces the physical burden to the warfighter,” Landers said. So although they will add more layers to warfighters’ protective clothing, they won’t add significantly more weight.

The two researchers are looking to include metal organic frameworks (MOFs) to their research.

The MOF fabric will literally add an extra layer of protection, with the nanoparticles working like tiny sponges to absorb the agent before it reaches the warfighter.

“The CBR Filtration Branch has years of experience testing different MOF materials for decontamination of chemical warfare agents,” Landers said.
Wang and Landers intend to apply for additional funding from strategic public and private partners. Next steps include adding sensors to detect exposure that work in conjunction with the LEDs’ and MOFs’ abilities to decontaminate.

So far, the project looks more than promising. The LEDs eliminate the need to provide a solution-based decontamination method, so the system is ideal for low-resource environments. Wang and Landers have also found the decontamination process is rapid.

Wang says the half-life of the mustard gas (the time it takes for half the chemical to be removed) is under a minute.

“We want to retain that same reactivity when we incorporate the dye and the LED circuitry into the fabric,” Landers added.

The two researchers say that the Department of Defense has invested more than $100 million into wearable tech. “We’re just trying to converge the two interests – wearable tech and decontamination,” Landers finished.