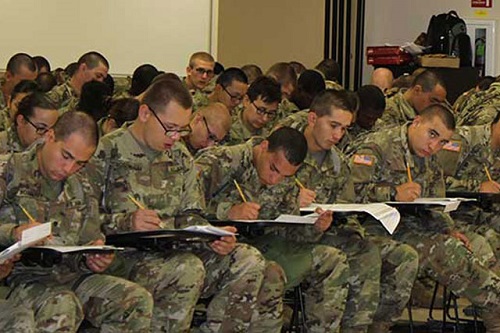 NOVEMBER 7, 2016, FORT SILL, Okla. – With more than 140 Army military occupational specialties to choose from, it’s easy to see how some recruits might find it difficult to decide on one MOS selection.

Recruits may base their decisions on what recruiters told them about the job, what they’ve heard from family or friends, or their own perceptions created from TV, movies and the internet. They may even be influenced by a quick viewing of an Army video about the MOS.

Psychologists with the Army Research Institute (ARI) for the Behavioral and Social Sciences at Fort Belvoir, Virginia, are working to create a tool to guide recruits toward an MOS that is the most compatible. The idea being that the Soldier who is matched with the right MOS will be more likely to enjoy the work, advance in it, and stay in the service beyond one enlistment.

“A lot of Soldiers don’t have information about a job before they enlist,” said Dr. Cristina Kirkendall, ARI research psychologist. “They pick a job based on either the bonuses or what the recruiter said they should choose or whatever it may be. And, that might just not be the best place for them.”

When a Soldier is committing several years of his or her life to the Army, the Soldier should be placed in a job that he or she enjoys doing, according to Kirkendall.

“Right now there is a lot of turnover, especially first term,” she said. “We want them to stay, and we figure, if we get them in the right place (MOS), they will stay.”

Reducing turnover by ensuring Soldiers enjoy their jobs could also save the Army a lot of money in recruiting and training.

They have surveyed 3,000 Soldiers in basic combat training, advanced individual training, and permanent party personnel from pay grades E-1 through E-6 across the Army, Kirkendall said.

“We wanted to get a broad range of responses on these survey items to see how well they are represented,” she said.

At Fort Sill, trainees provided responses on anonymous, hard copy Scantron surveys that took about 90 minutes to fill out, Nye said. One of the sample questions was, “I would enjoy helping people plan a fitness program.” Soldiers responded by choosing: agree, disagree, strongly agree or strongly disagree.

There were no right or wrong answers, and respondents were asked to respond honestly and accurately, according to instructions. The survey was designed with built-in checks to catch respondents who were penciling in the same response on every question.

Another assessment being developed is the Tailored Adaptive Personality Assessment System (TAPAS). “The TAPAS is a personality measure which gets at some of the non-cognitive characteristics,” Nye said.

TAPAS has been used by the U.S. military during processing of recruits at military entrance processing stations since 2009, according to the Drasgow website. More than 500,00 recruits have taken 120-item computer adaptive versions of TAPAS measuring 15 personality dimensions.

Other military services have been using surveys to for vocational guidance, Kirkendall said.

And, similar surveys are used by high school counselors as they advise students on vocations, Nye said.

The implementation of AVID is still three to four years away, Kirkendall said. It will not replace any testing currently used to determine a Soldier’s job eligibility, such as the cognitive Armed Services Vocational Aptitude Battery (ASVAB), or the Occupational Physical Assessment Test.

The results of a Soldier’s AVID will be for their use, not used by the Army to limit a recruit’s options, she said.