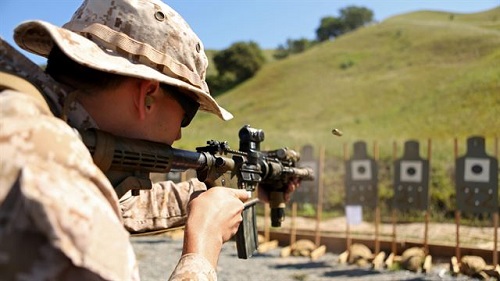 This shooting package is mandatory pre-deployment training to keep every Recon Marine at the same standard, according to Staff Sgt. Steven D. Holland, team leader with Company A. The training they conducted is familiarization to bring some of the junior Marines up to speed with some of the skills that more of the senior Marines possess.

Before the Marines can deploy, their skills must first become certified by the evaluators at I MEF. This is where EOTG comes in.

“There are certain checkmarks we have to hit and certain skills the Maritime Raid Force want us to provide to the MEU,” said Holland, a native of Riverside. “EOTG officiates our training at the end of the shooting package to say [we are able to deploy].”

The MRF is deployed by the MEUs to carry out raids against maritime objectives such as oil and gas platforms, ships and targets ashore.

They will spend seven weeks on this EOTG-led shooting package. At the end of this, the Marines will have the close quarters training expertise to conduct visit, board, search and seizure missions from afloat.

A VBSS is a specialized limited-scale raid from naval shipping onto a maritime vessel whether it’s a tugboat or merchant ship. If there is an opposing threat they would neutralize them, according to Capt. Scott D. Williams, company commander of Company A.

“The other 50 percent of what they will provide for the MEU is ground reconnaissance and surveillance for the Battalion Landing Team as well as for our own specialized limited-scale raids as well,” said Williams, a native of Oviedo, Fla.

Marines with the company perform drills as a team so instructors can identify which individual Marines are performing them improperly and replace their bad behaviors.

The training that EOTG provides gets the Marines confident in their weapons system. This instills self-confidence so that they can go out and accomplish the mission, according to Holland.

As the Marines prepare to deploy with the 11th MEU, they must focus on taking the skills they learn in the shooting package into their reconnaissance and surveillance missions.

“The Marines need to have the discipline and decision making required to go into a room at night with no exercise control safety mechanism and make a split decision on a target,” said Williams. “Having the comfort of knowing when to shoot [an enemy combatant] and weapons handling is the most important thing they could take away from this training.”

As the Marines finished their CMP shoot, concluding their first week of training, they still have six more weeks before they can conduct their realistic urban terrain exercise and three at-sea periods with the MEU before their training is finalized, according to Williams.