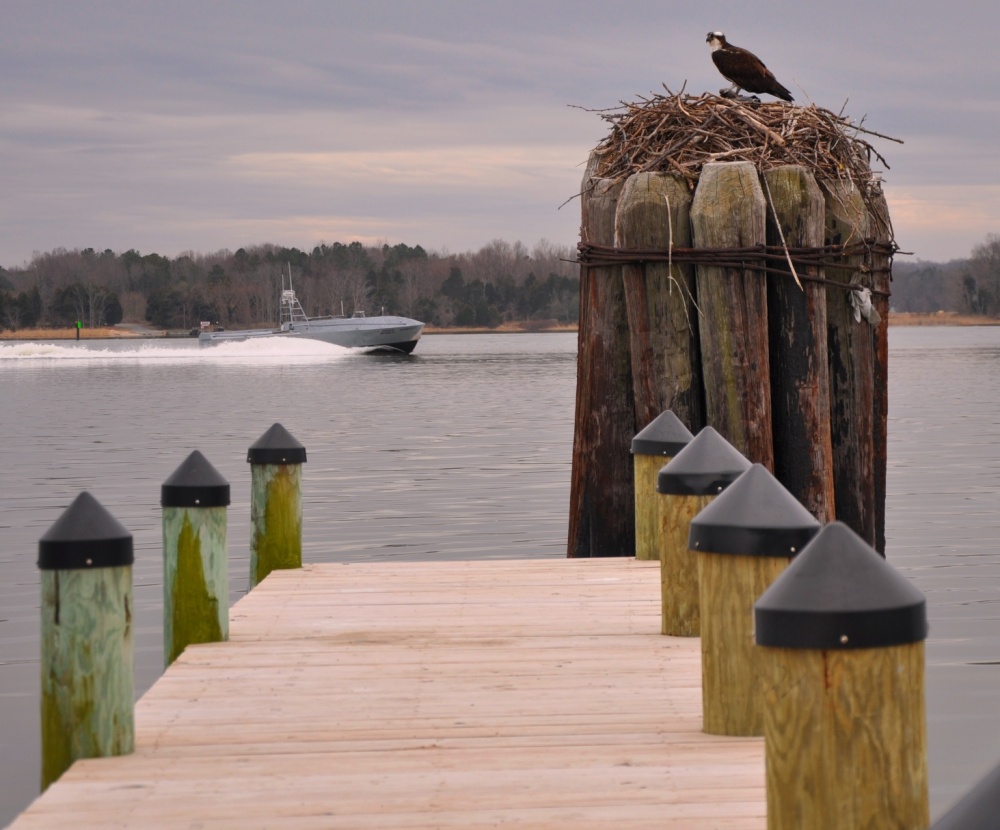 APRIL 19, 2018, Dahlgren, VA – An unmanned surface vehicle suddenly appeared on the Potomac River Test Range and, much like the ospreys that inhabit the area, it was on a mission to traverse the river – autonomously.

Nearby, an osprey watched the unusual sight from its nest as an array of autonomous guns and missile systems were lined up on a pier.

Distinguished visitors gathered on that pier to see the sight – a demonstration of Textron Systems’ Common Unmanned Surface Vehicle (CUSV). They listened intently as Navy and corporate leaders discussed their collaboration to weaponize a CUSV capable of multiple missions.

“The reason we collaborate is because we as a nation find ourselves in a situation where we can no longer take time to deliver capability to our warfighters,” John Fiore, Naval Surface Warfare Center Dahlgren Division (NSWCDD) technical director, told government, defense contractors and military personnel at the March 28 event. “We as a warfare center and you as industry are tasked to make sure our Sailors and Marines can deploy, execute their mission, and come home safely to their families and loved ones.”

NSWCDD engineers explained how the weapon technologies they developed will be evaluated for integration with Textron Systems’ CUSV to create a new modular autonomous weapon system to impact the Fleet’s maritime operations. There is currently no program or acquisition in place to implement these efforts, as they are in the early development stages without funding or planning to implement into the Fleet.

“Our first project is what we are calling a Surface and Expeditionary Warfare Mission Module which will consist of our engagement technology paired with our Battle Management System (BMS) controlling a Longbow Hellfire Missile,” said Chris Nerney, NSWCDD technical program manager for Unmanned Systems. “The idea is a mission package that could slide into the CUSV modular mission bay and provide a direct and indirect fire capability.”

The Navy and Textron Systems plan to prove the developmental concept that combiines direct and indirect fire capability with a gunfire demonstration later this year, followed by a live missile shoot in 2019.

“We are creating a modular surface and expeditionary warfare payload with a gun and a missile weapon system to be evaluated for integration onto the common unmanned surface vehicle,” said Kevin Green, NSWCDD technical lead for Ship-to-Shore Precision Engagement Integration and Prototype. “This payload could enable warfighters to counter fast attack craft and fast inshore attack craft and it could provide ship-to-shore fire support for expeditionary and special operations forces. It also gives us a baseline development effort to operate and perform further research and development.”

Meanwhile, Nerney, Green and their Textron Systems collaborators are envisioning how new payloads in the CUSV mission bay could benefit warfighters in various missions from maritime interdiction and special operations to surface warfare encounters that include engaging fast attack craft and fast inshore attack craft as well as other threats.

“We’re demonstrating the realm of the possible, proof of concept, and leveraging a Textron developmental craft and proven weapon systems with the Hellfire, BMS, and other capabilities,” said Wayne Prender, Textron Systems vice president of Control & Surface Systems. “Now, we’re bringing those technologies together and implementing them in an autonomous way that’s unique and new.”

For surface and expeditionary warfare missions, warfighters could use a modular, plug and play unit designed to fit the CUSV mission bay. This mission module includes sensors for targeting, a weapon station with a gun, and a launcher system for missiles. It could provide capabilities to enable a myriad of missions outlined in the Unmanned Surface Vehicle Master Plan.

NSWCDD engineers are creating the payload in response to guidance outlined in the Navy’s recent USV Strategic Roadmap and the Marine Corps Operating Concept. Moreover, they determined that weaponizing a USV with both direct and indirect fire capability could expand the USV mission portfolio to include surface warfare, maritime security, and maritime interdiction operations in addition to special operations forces and expeditionary forces support.

“We are developing automated weapon systems that provide tactically effective automation of the entire kill chain, and we’re doing so with minimal dependence on what is usually an unreliable datalink,” said Green. “Our experience integrating unmanned systems has taught us that the weapon systems must be just as automated as the platforms themselves in order to reduce the number of operators and operate reliably beyond line of sight.”

Specifically, Sailors and Marines could be able to use the Battle Management System to fire missiles and precision guided munitions from the CUSV. They would use the autonomous system for detection, tracking, and direct fire engagement.

“If the decision was made to outfit the CUSV with a variety of payloads, it could be deployed from nearly any large ship and could be deployed in significant numbers from a U.S. Navy ship or a Joint High Speed Vessel type platform to perform a variety of roles,” said Nerney. “We are focused on the Mine Countermeasures Unmanned Surface Vehicle today because it’s the Navy’s only program of record unmanned surface vehicle platform. It’s also our concept of modular plug and play weapon systems integrated onto a USV that can be scaled up or down as appropriate. If the Navy or Marine Corps decide to build big unmanned surface vehicles, we could scale the guns and missiles up. If the decision is to go with swarms of small USVs, then we could scale the system down accordingly.”

Between now and the live fire test, NSWCDD and Textron Systems will work together to rapidly develop and integrate as proofs of concept a variety of surface and expeditionary warfare payloads for the CUSV to include operations with unmanned air and subsurface vehicles.

“Our partnerships with industry allow us to move fast,” said Fiore. “If you’re the one that’s going to be giving this capability to warfighters, I want you to be effective in doing that. That’s what motivates us and that’s why we collaborate. That’s why it’s so important for us to have you here today with your equipment and have you partnering with us.”

The Navy’s collaboration with Textron Systems began in 2011 when the developmental Common Unmanned Surface Vehicle was developed and used in a variety of Navy demonstrations.

In December 2017, the company signed a cooperative research and development agreement (CRADA) with NSWCDD. The agreement covers the integration of missile, designator, and remote weapon station payloads to Textron Systems’ developmental CUSV with its 3,500-pound payload capacity on the deck and a payload bay measuring 20.5 x 6.5 feet.

The company previously contracted with the Navy to develop the new Unmanned Influence Sweep System (UISS) – minesweeping units towed by the CUSV – which will perform a mine countermeasure mission in support of a littoral combat ship.

“Building on the UISS program as the foundation, we signed the Cooperative Research and Development Agreement with Dahlgren,” said Prender. “We began to prototype surface warfare packages and other payloads that will strengthen the flexibility and potential capability of our platform and continue to inform the Navy and Marine Corps and overall surface community what the realm of the possible can be as they begin to expand the use of unmanned systems – in this case unmanned surface vehicles.”

The CRADA points out that NSWCDD will develop a government-owned open architecture weapon control system to include both hardware and software. Implementations of this design will enable rapid development to support and control a variety of precision guided weapons. This open architecture concept will allow vendors to provide munitions and subsystems for future capabilities as long as the munitions and subsystems support the government owned interfaces.

“We are only limited by our imaginations,” said Nerney. “Other ideas in the works for mission packages include intelligence, surveillance and reconnaissance. We can develop mission packages to support the carrying and launching of UAV’s – armed and unarmed. This will give us a hunter-killer over-the-horizon capability by pairing the armed common unmanned surface vehicle with an armed Firescout, laser weapon, or vessel-stopping equipment.”