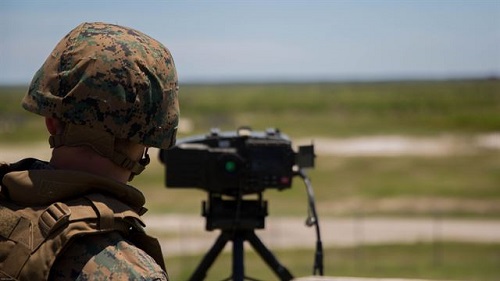 Major Michael McNeil, the course manager, says that the main objective of a TACP is to control airstrikes in a terminal environment in close proximity of friendly troops.

Air officers, who must be TACP certified, act as subject matter experts and provide their commander the knowledge of what air assets can be used in different situations.

“The purpose is to mitigate risk and deploy those air assets,” said Maj. Paul Minihan, a TACP student and the battalion air officer for 1st Battalion, 25th Marine Regiment.” It allows us to help those troops on the ground by employing fixed-wing and rotary-wing ordnance.”

Minihan, a CH-46 Sea Knight pilot, says that the Marine Air-Ground Task Force is a force multiplier and the conjunction of air and ground elements makes the Marine Corps much more effective.

“If we have good liaisons, good communication between the ground troops and the pilots in the air, we can operate much more efficiently,” Minihan said. “I’m here so I can provide my battalion commander the information to plan and execute missions that require air assets.”

As pilots receive fire-missions, they must orient themselves with the JTAC, the surrounding area, and the picture that troops on the ground see.

“Being on the groundside, you’re on a different visual level,” said Minihan. “You get a different perspective of what that guy on the ground is working with; maybe they’ve been out in the field for days and that comes with fatigue. They’re more open and exposed to the weather than that pilot in the aircraft.”

Throughout the course, the Marines receive a better understanding of close air support principles of fixed-wing and rotor-wing aircraft and build a working knowledge of the capabilities of the aircraft.

“What I want to walk away from here with is a sense of confidence and proficiency to effectively employ any weapons system that we have in the air around the battle space,” Minihan said.