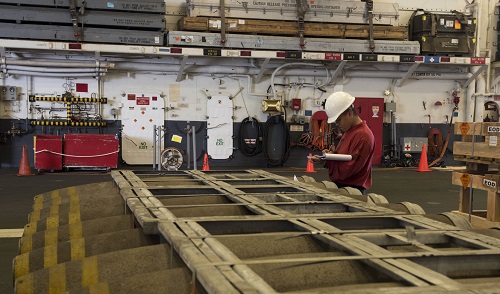 AUGUST 16, 2016, SASEBO, Japan (NNS) – Established 90 years ago, the aviation ordnanceman (AO) rating has a lot of history and tradition. Technical experts in aircraft weapons, they’re in charge of storing, servicing, inspecting and handling all types of weapons and ammunition carried aboard naval aircraft.

Over the past week, amphibious assault ship USS Bonhomme Richard (LHD 6) took on more than 1,000 pallets with more than 1 million pounds of ammo and ordnance. The evolution took nearly two days, bringing munitions from a barge to the hangar bay to be transferred to the ship’s magazines. In order for this to happen, Weapons Department required the expertise of all their Sailors, including Aviation Ordnanceman Airman Elliot Jones from Dallas.

“It’s really intense; it’s been quite an experience,” said Jones. “I’m learning a lot more than I ever imagined. I’m working with great people and getting the experience. This [ammo onload] is our biggest evolution on this platform as an AO. I’m working with a lot of great people and I’m really excited to be here. This has been my dream to come out here and serve my country.”

As a new AO aboard Bonhomme Richard, Jones said he is constantly looking to improve himself and going into his first onload, he felt fully equipped for the job.

“I feel like I was exceptionally well prepared for today’s evolution,” said Jones. “I’ve been given the best training on the background and details of handling ordnance. I’ve been shown the works by people who have been doing this for years and years. They have the experience and expertise.”

Prior to the evolution, Jones said he did everything he could to become as qualified as possible, and said it was because of those around him.

During the onload, Bonhomme Richard’s Weapons Department, G-1 Division leading chief petty officer Chief Aviation Ordnanceman Richard Delgado, from Kauai, Hawaii, said he noticed Jones’ strong desire to do the job to the best of his abilities and his persistence.

“He has an incredibly strong work ethic,” said Delgado. “He’s extremely professional. For this being his first onload, his work is stellar. He’s definitely stood out.”

With all the history within the AO rating, Jones admits he did not know too much about the rating when he enlisted.

“I knew very little to nothing about Navy rates, much less what any of the acronyms meant going into the military entrance processing station,” said Jones. “I was really just so happy and excited to be going into the military that you probably could have sold me on anything. One of my recruiters — not my primary, but my secondary recruiter is an AO. He always told me about how happy he was with his job.”

Choosing AO turned out to be a great choice, according to Jones.

“He told me that I would see the world because this rate would take me different places,” said Jones. “He told me about what the job entailed and that if it was offered to me, I should jump at the opportunity. It actually was the first rate offered to me. I simply told them that it sounded great. I am confident that this has put me in the right direction. I’m in, I’m serving my country, and it’s for the right reasons.”

The future is wide open for Jones and he looks forward to not only learning more about the rate, but the traditions of the Navy and Bonhomme Richard.

“I’m learning about the culture of the ship, and how things are done,” said Jones. “This is years and years of tradition and experience, way before anyone here was even alive. This [Navy tradition] has been passed down for generations. What I’m learning today has been built by the experience of millions of people. I hope to take on as much as I can and to one day pass on something new to people I train.”

Bonhomme Richard, flagship of the Bonhomme Richard Expeditionary Strike Group, is operating in the 7th Fleet area of operations in support of security and stability in the Indo-Asia-Pacific region.