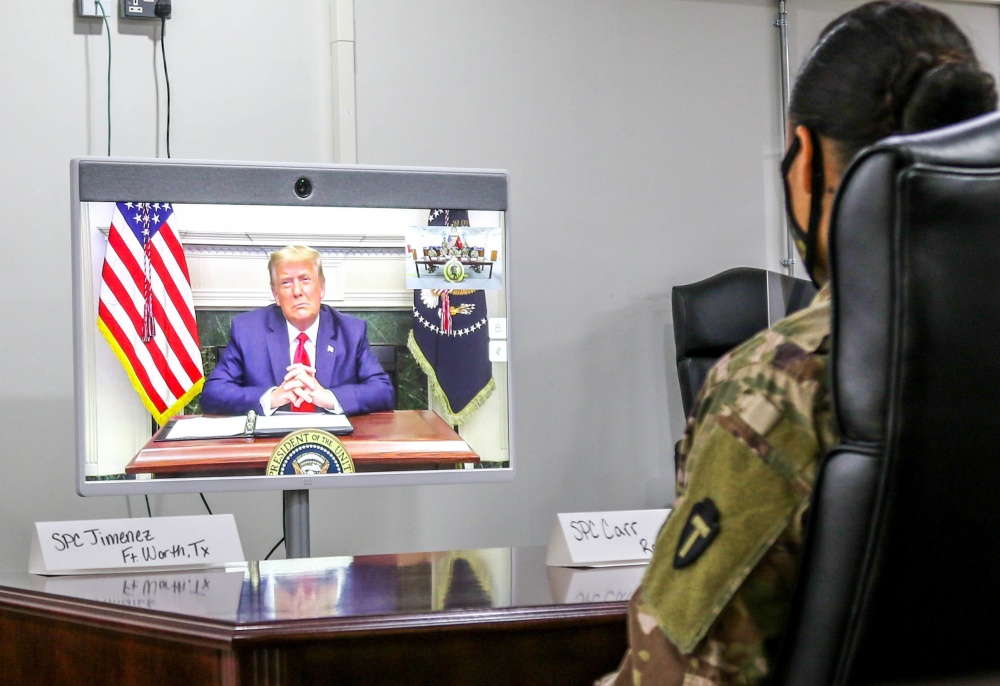 NOVEMBER 30, 2020 – U.S. service members with Task Force Spartan celebrate Thanksgiving with a call from the U.S. president via video teleconference.

The President’s call to deployed service members from all six services is a tradition to lift the troops’ spirits during the holiday season.

When President Donald J. Trump addressed the Army, he said, “Today I want to recognize Lt. Col. Timothy Redhair and the United States Army’s 36th Infantry Division. Tremendous people. From your base in Kuwait, you support our fight against radical Islamic terrorism and help combat Iranian aggression. We salute you.”

Redhair of Ellis County, Texas is the commander of Headquarters and Headquarters Battalion for the 36th Infantry Division.

“Being chosen to speak to the president is a tremendous honor. It’s an opportunity to show the folks back home that not only do we value our missions stateside in Texas, but also we provide important contributions to our current federal missions – specifically Operation Spartan Shield. We’re Texans serving Texans and now the world,” said Redhair.

TF Spartan service members from the Texas-based 36th Inf. Div. represented the Army service during the call. He met with all six services, including the newly created U.S. Space Force.

The meeting occurred at Camp Arifjan, the headquarters for TF Spartan.

HHBN Command Sgt. Maj. Daniel Castro of Round Rock, Texas, said, “I think it is an excellent opportunity for some of our Soldiers to represent the unit, and it is a chance for them to be a part of something not a lot of people get to do.”