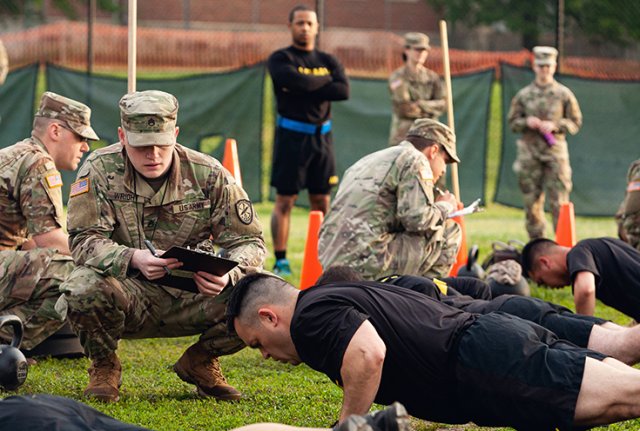 SEPTEMBER 2, 2019 – The Army is built upon the individual Soldier, and the battlefield of the future demands Soldiers who can excel under intense physical and cognitive demands. The new Army Combat Fitness Test breaks with over three decades of the Army Physical Fitness Test. The Army plans to roll out the test by October 2019 and replace the APFT as the Army’s fitness test of record by October 2020.

To succeed, the Army must address new training, evaluation, and equipment requirements. The Army is taking an innovative approach to implementing the ACFT by utilizing field tests, practice ACFTs, and qualifying all noncommissioned officers and officers as graders.

Instead of training to pass an arbitrary strength standard of push-ups and sit-ups, Soldiers must maintain a healthy lifestyle and train for overall strength and conditioning. Research shows this will decrease injuries, which will increase the number of deployable Soldiers. The Australian army instituted similar training in 2016 and decreased their trainee injury rate by 40 percent. The money saved in decreased injury rates and the increase in deployable Soldiers is worth the cost of purchasing the required equipment.

In April 2019, the ACFT Mobile Training Team held an ACFT demonstration for more than 100 Army inspectors general at the World Wide Inspector General Conference. During this demonstration, Col. Ray Herrerra, command inspector for U.S. Army South said, “After taking the test, I believe the ACFT is a substantial improvement toward determining readiness, and it better prepares Soldiers than our current annual test.”

ACFT MILITARY TRAINING TEAMS
In order to implement the ACFT properly, the Army is training a core group of trainers to prepare their own units and administer the test. The MTTs prepare and certify new Army Master Fitness instructors and mid-level supervisors to train Soldiers to administer the ACFT. This approach trains the trainers without negatively impacting active duty readiness, and integrates the new test regime at maximum efficiency before it is officially implemented across the force.

In July 2018, the Army published Executive Order 219-18: The Implementation of the Army Combat Fitness Test, which officially established 30 Active Duty, 10 USAR (Reserve), and 10 ARNG (National Guard) NCOs/officers to serve on the ACFT MTTs across the force.

In May 2019, as part of the Association of the U.S. Army National Security Studies team, Maj. Joseph Flores and Master Sgt. Shelly Horner (ACFT MTT team leads) were interviewed about the Army’s effort to train the trainers and the requirements involved in the certification process. According to Flores and Horner, the MTTs are responsible for training three levels of graders, Levels I-III, each with its own distinct knowledge, skills, and abilities.

ACFT Level I Grader has the knowledge, skills, and ability to:

ACFT Level II Grader has the KSA to:

ACFT Level III Grader-Instructor has the KSA to:

Currently, more than 6,000 Soldiers have received formal ACFT Level II-III Grader Validation training from one of the ACFT teams. Since Level II and III graders are allowed to train others at a lower level, it’s hard to document how many other graders have been trained to the Level I standard. The Army’s plan is that all NCOs and officers receive an ACFT Grader Level Validation before implementation of the ACFT.

PREPARATION
The Army Combat Fitness Test Training Guide has multiple examples of the movements and exercises involved in the ACFT and has equipment substitutions (like an ammo can, water can, or sandbag in place of kettlebells or medicine balls) for those deployed or without access to the ACFT lane equipment. For additional information on exercises and movements, consult the Army doctrine on exercise: FM 7-22: Army Physical Readiness Training.

For injured Soldiers, and those on permanent profile, the U.S. Army CIMT is developing alternate events, to be officially approved on Oct. 1, 2019. These events may include the stationary bike, swimming events, or rowing.

*If NCOs and officers are interested in obtaining their ACFT certification from one of the MTTs, they can contact their unit’s first sergeant.