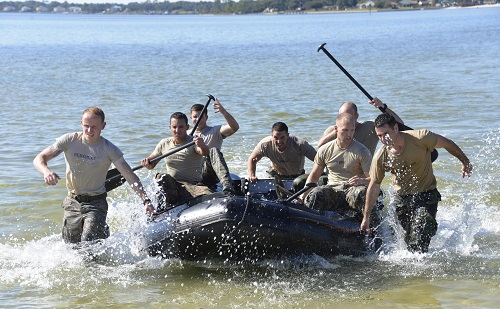 JULY 27, 2016, HURLBURT FIELD, Fla. (AFNS) – In a move to meet the high demand for battlefield Airmen, the Air Force announced changes to retraining and cross-flow, outlined in a policy memorandum from April.

The changes allow Airmen to be released from their current jobs in the Air Force to cross-train into the special tactics career fields, should they be selected following an assessment of physical, mental and psychological attributes.

“This change in policy will allow potential candidates the opportunity to retrain that were not able to previously,” said Chief Master Sgt. Alan Yoshida, the battlefield Airmen training pipeline manager. “Battlefield Airmen career fields historically have high attrition in training. This policy change could benefit the Air Force by increasing the candidate pool to those previously not allowed to cross-train.”

Airmen who don’t pass further initial qualifications, such as the assessment and selection process or failure in the battlefield Airmen training pipeline, will be reinstated into their prior career field without any prejudice.

“Through this policy change, the Air Force has focused efforts to ensure qualified Airmen have an opportunity to pursue a career in special tactics,” said Chief Master Sgt. Marshall Farris, who works for Headquarter Air Force A3. “Due to the rigorous training and unique career field requirements, qualified personnel are always in high demand for these challenging and rewarding specialties.”

The Air Force does not anticipate significant impacts to any one career field, as the number of Airmen selected for special tactics are minimal. However, while only small numbers are anticipated, this new policy could greatly impact the special tactics manning and mission capabilities in the future.

“We need the right people who can meet or exceed very demanding standards. With this policy shift, there are some highly qualified individuals in the Air Force who can now apply for special tactics assessment and selection,” said Col. Michael Flatten, the vice commander of the 24th Special Operations Wing, the sole special tactics wing in the Air Force.

Airmen in combat control, special tactics officer and special operations weather are assessed and selected as special tactics Airmen for Air Force Special Operations Command. Other battlefield Airmen career fields, including TACP, CRO and pararescue, are often assigned to Air Combat Command. Regardless of background, all battlefield Airmen career fields are demanding and difficult, with an average attrition rate of 80 percent throughout initial selection and training.

“We are looking for Airmen with the willpower and mental fortitude to complete extraordinary tasks for a greater cause,” Yoshida said. “This is not for everyone, but the memorandum allows us to recruit a small audience that may have been unavailable to us before — Airmen who want to challenge themselves in an extremely demanding occupation.”

Cross-training is a force management program used primarily to balance the officer and enlisted career force inventories across all career fields, ensuring sustainability of career fields in support of Air Force mission priorities.