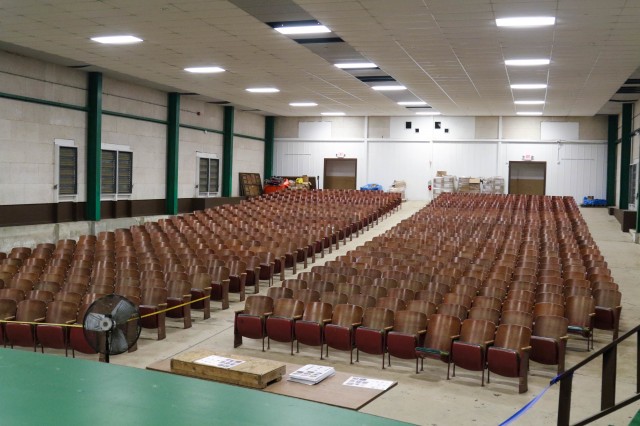 MAY 21, 2020 – After Lt. Gen. Darryl A. Williams, superintendent of the U.S. Military Academy, announced March 19 that the Corps of Cadets would not be returning from spring break as planned, academy leadership immediately began planning how and when cadets would arrive back at West Point.

That plan will go into effect Tuesday as the first members of the Class of 2020 return to West Point to begin outprocessing prior to their graduation ceremony June 13.

The cadets are currently spread throughout the country but they have to return to the academy before beginning their Army careers. At the bare-minimum, cadets need to move out of their rooms in the barracks and pickup their cars if they didn’t take them home for spring break. The future second lieutenants are also required to outprocess from the academy before moving on to the Army. Many of the outprocessing steps require cadets to be in person at West Point such as medical screenings, closing accounts and returning ID cards.

Because the return of the cadets was necessary, a planning group quickly began working out the details of how it would be accomplished in the middle of a pandemic. Lt. Col. George Mitroka, who oversaw the planning process, said the development of the plan to bring back the Class of 2020 began with representatives from throughout the academy coming together before a whiteboard. They then began brainstorming each step of the process that would be required for the cadets to return to the academy safely.

“We’ve never done this at West Point and it’s very rare to be able to say something like that,” Mitroka said. “Most of the time you can pull a CONOP (concept of operation) off the shelf. Graduation is pretty much the same every year, but, in this case, we’ve never been put under these types of restraints and constraints— social distancing and medical factors. All those things kind of had to get thrown into the plan for us to consider as we developed it over time.”

The first step in the process of bringing the Class of 2020 back was initiated May 8, when cadets in the class began responding to a questionnaire to identify any COVID-19 symptoms or exposures. They have also been taking their temperatures and reporting them back to their chain of command.

The data, which will have been compiled over the course of two weeks, will then be used to inform decisions about who is cleared to travel back to the academy when the time comes.

“What we want to do is make sure that if we know someone is showing signs and symptoms, not to present that to the body of the Class of 2020 that’s coming back,” Mitroka said. “If we can prevent one person from injecting into this controlled environment, that makes it safer for everybody else.”

The more than 1,000 cadets in the Class of 2020 have been divided into five cohorts based on their regiments and which barracks they live in. Each cohort will arrive back at the academy on a different day between Tuesday and May 30.

West Point has coordinated each of the cadet’s travel plans back to the academy and roughly 60% of them will be driving, from as far away as California, while roughly 40% of them will be flying, Mitroka said. Cadets who are flying have been directed to fly into Newark Liberty International Airport in Newark, New Jersey, where they will meet a West Point representative and be bused to the academy along with other members of their cohort.

Whether they are arriving in a personal vehicle or being brought up from Newark, the first stop for each cadet will be the transportation motor pool, which is located a few miles from the academy’s main grounds. Each cadet will be assigned an arrival time in advance, so they are staggered throughout the day.

As cadets arrive at the TMP, they will go through an initial medical screening and be checked for COVID-19 symptoms. If a medical specialist decides they have potentially been exposed or if cadets are showing symptoms, they will be placed in a “hot” van and transported to Keller Army Community Hospital, which is on post at West Point, for further evaluation.

Cadets who pass the initial screening will enter the “warm” staging area and board a shuttle that will take them from the TMP to Camp Buckner, which is across the street. There, every cadet will be tested for COVID-19 before being allowed onto the academy’s main grounds.

The cadets will be transported to the Camp Buckner theater, which will serve as a holding area as they wait to best tested or wait for their results. Cadets will be required to wear a mask and will be kept socially distanced from the time they arrive at the TMP through the entire screening process.

After arriving at Camp Buckner, cadets will be taken to a medical building in groups of 10 to be tested. The swabs will be performed by personnel from Keller Army Community Hospital and the testing will be conducted in a lab at the hospital. Mitroka said they expect the turnaround process to be about two hours for each cadet when you factor in the transport time for the samples to KACH and back, as well as the time for the actual test to be conducted in the lab.

While cadets are waiting for a test or their results, they will be receiving briefs from their chain of command about the rules they have to follow at West Point and the tasks they should complete before graduation.

If a cadet tests positive, which Mitroka said they statistically expect to happen, he or she will be brought back to the medical building from the holding area where a medical professional will inform him or her about the positive result. The cadet will then be placed into a “hot” van and taken to an isolation facility on post.

As cadets test negative, they will be cleared to travel to West Point in a “cold” caravan. When they arrive at the academy, the cadets will enter a 14-day controlled monitoring phase.

The different cohorts have been designed to separate cadets based on where they live on post, and Mitroka said “firebreaks” have been designed in the barracks to keep the different cohorts separated. There are specific bathrooms, hallways and stairwells each cohort will have access to in order to limit any potential spread and minimize the amount of contact tracing that will need to take place if someone begins to exhibit symptoms.

They will also eat in shifts at the mess hall, where changes have been made to allow for increased social distancing and safety protocols.

“We’ve reduced the number of people per table,” Mitroka said. “We’ve created spaces between the tables. We’re going to have the mess hall workers deliver all the food to the table before they come in. There’s a period where they clean before the next cohort comes in. Then we’re mixing it up. We’ve got hot meals and box meals, to give the mess hall a chance to reset and clean.”

The cadets in different cohorts will have minimal contact before the end of the 14-day controlled monitoring period, which will end for the last group a couple days before the June 13 graduation. They will then be able to have graduation rehearsals, the traditional graduation banquet the night before the ceremony and finally the graduation itself on The Plain.

“The plan to safely return the Class of 2020 to West Point was the result of a tremendous amount of hard work across West Point, and our process is also reflective of best practices across our Army,” Commandant of Cadets Brig. Gen. Curtis A. Buzzard said. “I truly am excited to have the Class of 2020 back at the academy and to see them graduate. The graduation ceremony is an important milestone, and while it may not be a traditional ceremony, our planning efforts will enable them to come together as a class one final time and for all of us to celebrate all of their accomplishments. We will also rightly honor their official transition into the profession of arms. They are ready, and I know they are going to make a tremendous impact on our Army.”

In the time between their arrival at the academy and the ceremony on June 13, the members of the class will complete all the outprocessing steps required of them. They will also go through leader development sessions designed to prepare them to lead Soldiers in the COVID-19 environment.

After the ceremony, they will pin on their second lieutenant bars and leave the academy as officers to begin their Army careers.