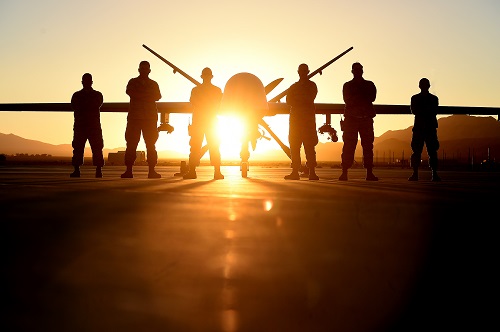 The RPA enterprise of MQ-1 Predators and MQ-9 Reapers is maintained or operated by Airmen from more than 30 Air Force career fields, each one playing a key role in supporting every combat air patrol. The patrols enable combatant commanders access to intelligence, surveillance and reconnaissance capabilities at all times.

A combat air patrol is essentially having an aircraft in the air, providing joint combatant commanders with dominant ISR and real-time munitions capability. Today, the RPA enterprise flies a total of 60 CAPs in a 24-hour period requiring thousands of Airmen from pilots and sensor operators to maintainers, intelligence personnel and weather forecasters.

Before the RPA capability can be utilized, an authorization order must first be given from a joint combatant commander. From there, the order falls down the chain of command until it reaches a squadron operations director or operations superintendent.

The ops director will work with the wing operations center to ensure all logistical necessities are in place in order to complete the specific mission order.

“Mission planning in a new area of responsibility can be intense and require additional documentation such as airspace control plans, air operations directives, air tasking orders, and rules of engagements,” said Lt. Col. Ronnie, the 42nd Attack Squadron’s ops director. “It would be my job as well as other shops to disseminate these documents. I’m also responsible for ensuring the squadron is fully manned and ready to operate in combat 24/7/365.”

The director is also accountable for the weapons and tactics shop, scheduling, training, plans and programs, and squadron aviation resource managers.

According to Ronnie, all these shops, while different, each ensure the mission completion by validating that proper weapons are chosen to meet mission requirements, crews have proper training to use those weapons, and the correct aircrew is flying and has the necessary flight requirements.

“Before we can even plan a mission, we first have to figure out where we’re going to get the manpower needed to fly the aircraft,” said Maj Steven, the 432nd Wing’s operations center deputy director. “After that we have to coordinate a launch and recovery site, the ground control stations, and get planes to the location.”

Once the mission’s logistics are good to go, intelligence Airmen must ensure the aircrew has the necessary qualifications and information to fly in the region.

“When we go into a new (area) we have to first make sure the aircrew is qualified to operate in that location,” said Senior Airman Aaron, a 432nd Wing/432nd Air Expeditionary Wing intelligence evaluator. “After that’s done, then we can began to gather the necessary information to fly a successful mission.”

At this point, a mission support analyst collects information to have situational awareness of the overall environment. Information included is the type of mission, possible targets, combatant groups, common practices and beliefs of said groups, the terrain, and overall geographic familiarization and more.

With this information, the analyst briefs the pilot, sensor operator, and mission intelligence coordinator, to ensure the aircrew is aware of anything specific to the operating environment that could hinder or help mission success.

“We, as (intelligence personnel), must make sure that the aircrew and supported units flying the mission are completely aware of everything that could hurt or help the mission so we can get the job done,” Aaron said.

Also in this briefing, a mission control element made up of the pilot, sensor operator, and mission intelligence coordinator, discuss information provided by the analyst as well as tactics, techniques and procedures, and safety checklists. They ensure everyone in the control element is physically and emotionally able to fly the mission.

Once the mission is planned, weather Airmen step in to gather the latest weather data to determine if it’s safe for the aircraft to fly.

According to Senior Master Sgt. Ken, the 432nd Operations Support Squadron weather flight superintendent, compared to a fighter, bomber or airline aircraft, RPAs can be more susceptible to inclement weather.

With the mission planning portion of the CAP complete, Airmen across five career fields and even more shops have been involved in starting a patrol. Each one adding their own instrumental piece to the puzzle that makes global RPA operations a reality, ultimately eliminating enemy combatants and saving American and coalition lives downrange.