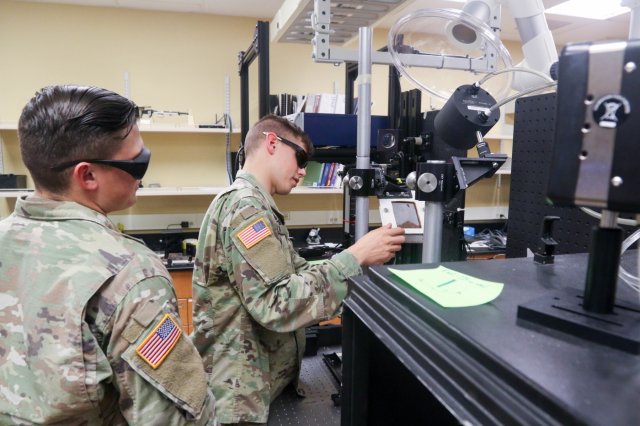 NOVEMBER 5, 2019 – Initially it seems like nothing happened. The command, “Laser on” is given, but the laser itself isn’t visible to the human eye. Then, sparks fly and the middle of the steel plate placed as a target for the laser beam starts to melt.

It is a common occurrence in the high energy laser lab in the basement of Bartlett Hall at the U.S. Military Academy where Capt. Joseph Fasone and cadets are doing research for the academy’s Photonics Research Center.

For now, they are only burning holes in steel plates, and one time by accident the wall in the lab, but in the coming years the technology they are testing will hopefully be used to take down drones and mortars on the battlefield.

The idea of using lasers for defense has been worked on within the Department of Defense since the 1980s starting with the Strategic Defense Initiative, which was also referred to as the Star Wars program. The initial goal was to develop a way to defend from Soviet Union nuclear weapons.

More than 30 years and countless Star Wars films later, the idea of using lasers as a weapon on the battlefield is closer than ever.

With the fall of the USSR, the research moved on from the idea of zapping a nuclear missile out of the air, but to the ability to use a high energy laser to take down an unmanned aerial vehicle or other munitions is moving closer to being a part of the Army’s arsenal.

“For a projectile, like a mortar or a rocket, that’s moving at a relatively high rate of speed, as soon as you can track that projectile and you hit that on button, you’re instantly depositing that energy on the target,” Fasone said. “In the case of a rocket or a mortar round what you’re trying to achieve is some kind of an ignition of the primary charge in that explosive device. For an unmanned aircraft, what you’re really doing is you have the ability to pinpoint and precisely destroy a component of that aircraft.”

The center studies a wide range of topics all dealing with photonics, which is the study of light. While some of the research being done in the Photonics Research Center sounds like it was ripped from the pages of a science fiction novel, the researchers in the center are also working on a wide range of projects dealing with energy storage, conductive materials and more.

The center includes researchers from West Point’s departments of electrical engineering, physics and nuclear engineering, and chemistry and life sciences. They also partner with researchers throughout the DOD and at universities from coast to coast.

Cadets across all four classes at West Point also take part in research. They have the chance to get involved in projects as plebes (freshmen) and the goal, said Lt. Col. Kirk Ingold, who is the director of the center, is for them to be able to publish research in academic journals by the time they graduate.

“We use research as a teaching mechanism,” Ingold said. “We don’t just interact with our students in the classroom where we’re standing in front of a whiteboard or blackboard lecturing. We bring the students into the lab. They receive hands on experience, and they learn some of these advanced topics that they wouldn’t necessarily see in the classroom.”

The physicists in the center work largely with lasers, including the defense applications of high energy lasers. The electrical engineers involved in photonics research work with optical and nanoscale lasers that can be used for communication or everyday uses like facial recognition on an iPhone, Ingold said. The chemists and life scientists are able to study how to use light as an energy source to detect materials through spectroscopy and any other applications.

One project currently taking place within the center is studying how to use organic proteins from organisms such as algae, which is easily renewable, to convert sunshine into power and cost effectively store it.

“Energy is a problem wherever you go,” Kamil Woronowicz, an assistant professor in the Department of Chemistry and Life Sciences, said. “Sunlight is present most places during the day, so we need to store it, but at the same time it’s a complex issue. There’s a whole different set of challenges when using proteins on electrodes.”

Col. John Burpo, Nagelli and their team are working on finding ways to turn nanoscale materials into robust electrical connectors. That would enable devices to shed considerable amounts of weight by turning the structure itself into a battery instead of requiring a separate battery to be included. The goal is to potentially harness solar power to make the energy source self-renewable, which builds upon the work being done by Woronowicz’s team.