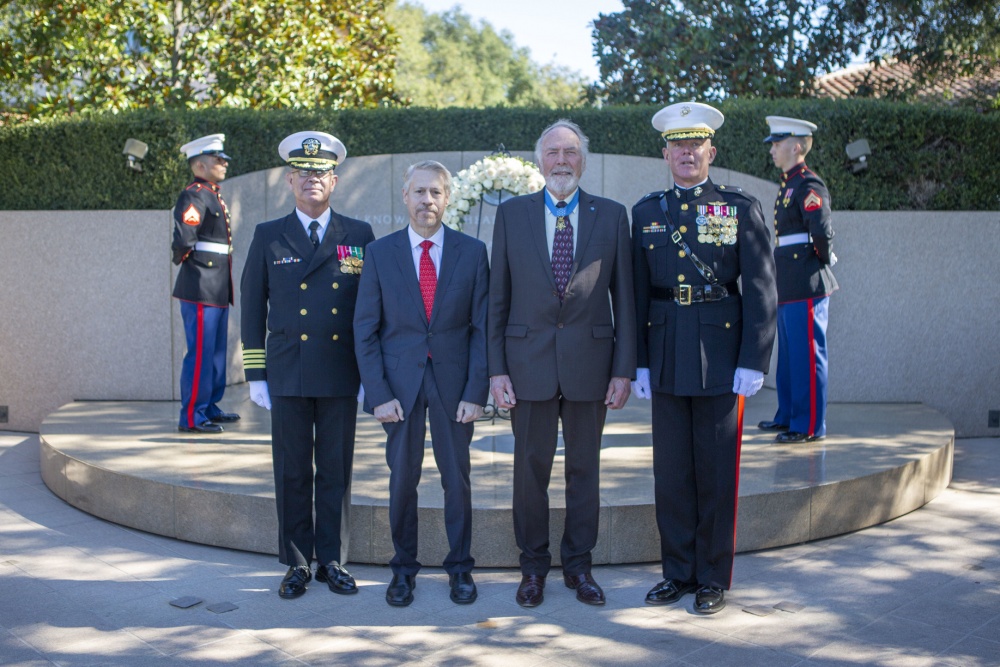 The ceremony is an annual event to commemorate the life and legacy of the 40th president of the United States, with a ceremony being held every year on his birthday by presidential declaration since his death in 2004.

For 16 years, Pendleton Marines have played a crucial role in the ceremony, providing a funeral honors team, a color guard, and a speech from the base commanding general.

“It’s a real honor to be able to lay this wreath on a former presidents’ gravesite,” said Cpl. Dylan Ackerman, an administrative specialist with Headquarters and Service Company, Headquarters and Support Battalion, Marine Corps Installations West, Marine Corps Base Camp Pendleton. “To be able to say that I participated in an event like this is something I won’t be forgetting for a long time.”

Over the years, the Marines have become a fixture in the ceremony.

“This is the 16th year working in conjunction with Camp Pendleton to pay tribute to President Reagan in honor of his birthday,” said John Heubusch, the executive director of the Ronald Reagan Foundation and Institute. “We are honored to have the support of our fighting men and women from a vital military installation.”

During his presidency, Reagan held the United States Marine Corps in very high regard as America’s 911 force. He is quoted as saying, “Some people spend an entire lifetime wondering if they made a difference in this world. The Marines don’t have that problem.”

“President Reagan understood what service, dedication, and sacrifice was,” said Brig. Gen. Dan Conley, the commanding general of MCI-West, MCB Camp Pendleton, during the ceremony. “Because of this, he remains a hero to the Marine Corps and to the military to this day.”

In closing, Conley offered his final remarks to the attendees of the ceremony.

“I had the great honor and privilege of coming into a Marine Corps that was stronger, better organized, and better equipped because of his ‘peace through strength’ philosophy,” said Conley. “What I’ve come to find and appreciate more is the strength, the dedication and the patriotism of Ronald Reagan.”