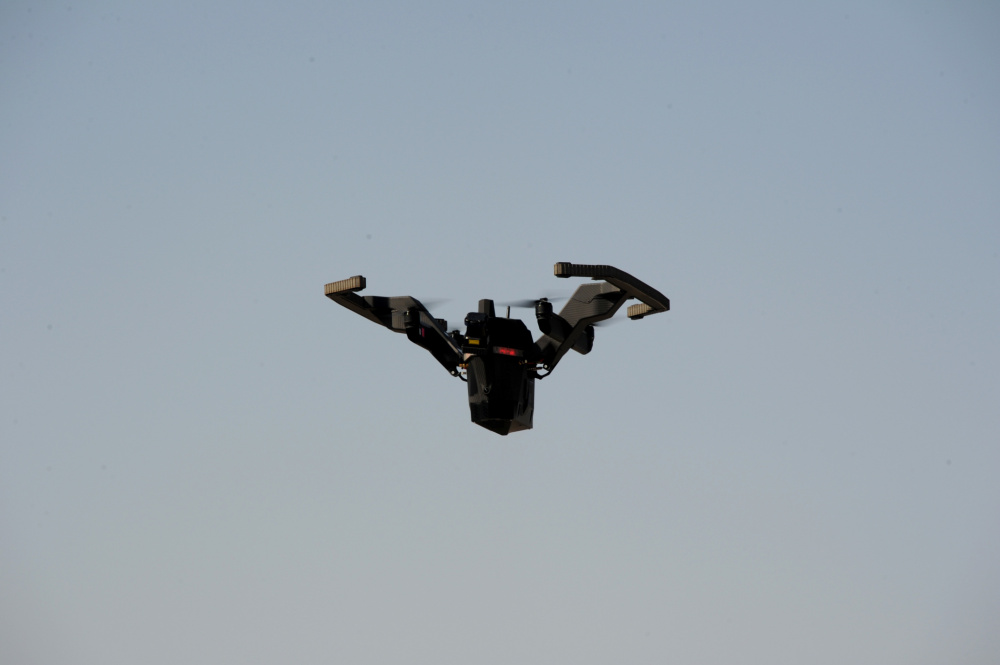 DECEMBER 8, 2020 – During Project Convergence 20, the Army Futures Command’s capstone exercise of an ambitious project of learning, multiple examples of the most cutting-edge military technology were put through their paces on U.S. Army Yuma Proving Ground’s vast ranges.

Among the most futuristic of these systems was the Pegasus, a family of tactical autonomous systems that blur conventional notions of ground and air systems.

“These vehicles fit a new category of robotic systems,” said Alberto Lacaze, President of Robotic Research. “They aren’t quite ground vehicles, they’re not quite aerial vehicles—they’re somewhere in between.”

The Pegasus Mini folds into the size of a football, the intermediate Pegasus II weighs about 15 pounds, and the larger Pegasus III, colloquially dubbed ‘Megasus,’ is robust enough to tote a machine gun with free range of motion or other similarly-sized payload. What all three have in common is the ability to be used as either an airborne unmanned aerial system (UAS), a ground-roving tracked vehicle, or both, in service of simple surveillance or to create richly detailed 3D maps of an area. When the vehicle is shifted from ground-based to air-based mode, its ground tracks rotate up to become propeller guards. The potential uses for Soldiers are numerous.

“When they walk into an urban area, they are very exposed, especially if there is no place for a vehicle to go,” said Lacaze. “The advantage of this system is that it could go to a location and perch to maintain oversight.”

Soldiers could use multiple craft to fly into a building through an upper-story window, land them inside, and then operate them as a ground rover to inspect or surveil other portions of the building, flying over staircases and obstacles wherever needed.

“Soldiers are not always sure if a building they want to enter is structurally sound after a fight,” said Lacaze. “This can provide a set of eyes in a dangerous location.”

Robotic Research is also developing a hybrid Pegasus that will powered primarily by gasoline, which means it can stay aloft for hours longer than a system powered only by batteries. It will also boast artificial intelligence that can work with other craft in tandem to produce intricate maps of an area as it roves along, even in a GPS-denied environment. If an area is suspected to be contaminated by biological, chemical, or nuclear weapons, a Pegasus outfitted with detection equipment could survey it while its human operators are a safe distance away.

“All of this can be done without GPS,” said Lacaze.

During Project Convergence, the Pegasus systems were engaging in three simulated missions per day as testers gathered data about their performance. One human controller could utilize multiple Pegasus to characterize portions of YPG’s rugged ranges by air and ground and have maps displayed to them in near real-time.

“We mapped a large area and did laser designations from the ground and the air,” said Lacaze.

The intense conditions, most notably the unrelenting summer heat that saw nine days of record-breaking temperatures, gave the testers insights into the system’s performance in the world’s harshest conditions. Lacaze expects the Pegasus will see additional testing at YPG in the future.

“The support we’ve gotten from YPG has been very good,” said Lacaze. “We will keep refining the system and learning more.”