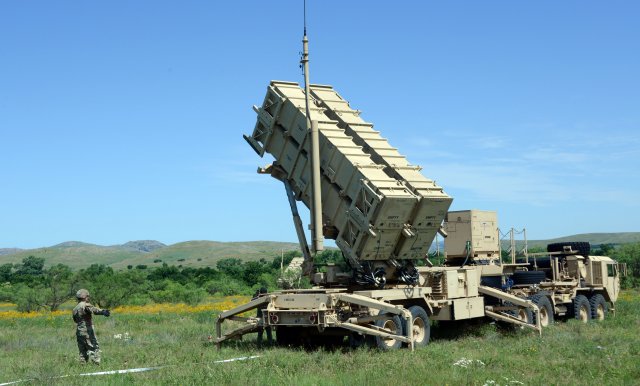 AUGUST 21, 2019 – The Army’s Patriot Air Defense battalions are upgrading their fire-control computers, communications, radars and operator interfaces while adding more capable missiles in a refit that is scheduled to continue through 2021.

About 25 years ago, units began receiving Patriot Advanced Capability 3 — or PAC-3 — missiles combined with an overhaul to command and control systems and related software.

Now Patriot units are undergoing a system-wide upgrade, to include radar improvements that will enable them to use the full capability of the PAC-3 MSE missile.

CONFIG 3+/PDB8
An upgrade called Post-Deployment Build 8, or PDB8, is providing Patriot units with a more capable radar by transitioning from analog to digital processing.

“It’s really a depot-level rebuild of much of the components of the Patriot System,” Holler said.

The internal components of the Patriot radar went from analog “70s- and 80s-based circuit-card technology to digital processing”, he said.

The AN/MPQ-65 radar for Patriot became AN/MPQ-65A with about 30% additional range and increased processing speed.

The new upgraded radar should also be cheaper to operate, he said, “because you’re not replacing so many parts.” In addition, he said it will be more survivable against an electronic attack.

UPGRADE TIMELINE
Nine of the Army’s 15 Patriot battalions have already undergone the upgrade.

Those battalions were the first to undergo the PDB8 upgrade, which began in 2017.

“We brought some equipment from the States and from outside Korea to maintain that ‘fight tonight’ readiness mission,” Holler said, “while we took two batteries at a time offline and upgraded them.”

The next unit to be upgraded is the 1st Battalion of the 43rd Air Defense Artillery, which recently returned to Fort Bliss, Texas, from its deployment to the United Arab Emirates. The unit is scheduled to undergo recapitalization in fiscal year 2020 and its equipment is already being upgraded at Letterkenny Army Depot in Pennsylvania.

ANALOG TO DIGITAL
Patriot units are also upgrading their operator interfaces from analog to digital technology.

The operator interfaces in a Patriot fire unit are manned by three operators. The interfaces have two consoles, including a digital weapon control computer, and three radio relay terminals.

“We updated the communications relays and fire-control computers,” Holler said.

ADDITIONAL UPGRADES
Another upgrade is the Combined Crypto Modernization Phase 1 which provides routers and connections at the operator interface consoles that allow both classified and unclassified internet to be available at the Patriot tactical site. It also provides Beyond Line of Sight capability with the Patriot Data Information Link, known as PADIL, allowing units to separate and maintain connectivity.

Before PDB8, Maule said it was difficult for the Patriot system to recognize if it had been affected by Advanced Electronic Countermeasures, or AECM, which could result in false tracks and firing on false targets. PDB8 AECM mitigation now uses advanced algorithms to determine AECM attack patterns and remove false tracks from the operator scope, he said.

Non-cooperative target recognition, or NCTR, is being added to the system. Operators can now request additional combat identification information about the target and Maule said “This will help prevent fratricide”.

“The overall achievement by doing this upgrade is we maximize our search ability and we maximize the capability of the MSE interceptor,” Holler said.

“It’s been a big success story,” he added about the Patriot upgrades.

INTEGRATED AIR DEFENSE
Patriot batteries are the Army’s primary High to Medium Air Defense, or HIMAD system, and are expected to remain in service for at least two more decades to provide defense against ballistic missiles and aircraft.

Eventually Patriot batteries will be connected to an Integrated Air and Missile Defense Battle Command System, known as IBCS, that is being developed by Army Futures Command, Holler said. In fact, the IBCS is currently the No. 1 priority for modernizing Air Defense, he said.

A limited user test, or LUT, for IBCS is planned for next spring at White Sands Missile Range, New Mexico.

A future Patriot radar, dubbed the Lower Tier Air and Missile Defense Sensor, or LTAMDS, will be compatible with IBCS and able to interface with all air defense systems, Holler said.

Plans call for fielding the first LTAMDS beginning in 2022, with an incremental fielding plan for all 15 Patriot battalions by 2031.

“The time that it’s going to take to upgrade all 15 battalions to LTAMDs, you’ve got to have something that maximizes the ability of your current interceptor and meets the advanced threats, which this upgrade does,” Holler said of the Config 3+/PDB8 refit.

Once the IBCS is operational, multiple different types of sensors will contribute fire-control level data to a common command and control system, he said, adding all the ADA systems from Terminal High Altitude Air Defense, or THAAD, to Patriot and even the Short Range Air Defense, or SHORAD system, will benefit from it.

“Right now, if you’re going to fire Patriot, it’s got to be the Patriot sensor that holds that target,” he said.

With IBCS, “You might sense it with a THAAD radar, but the right thing to do might be to shoot it with an IFPC [Indirect Fire Protection Capability] missile or with a Patriot missile, or any combination of sensor and shooter,” he said.

“It’s really going to offer you a lot of flexibility in how you employ forces,” he said of the IBCS. “You’re going to be able to optimize the right sensor to the right shooter.”