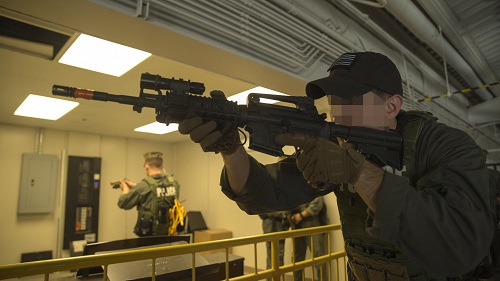 The exercise simulated an active shooter and hostage situation and was designed to test various aspects of the depot’s emergency response capabilities.

During the exercise, Marine Corps law enforcement officers responded to the All-Weather Training Facility after an active shooter entered and shot into a crowd of family day attendees before taking hostages in a closed room.

“When we conduct these types of exercises, we look at individual tactics for each department when responding to an emergency, but we also like to take the opportunity to look at how those groups work together as a team to respond to a more complex incident,” said Rick Scott, team leader for the Marine Corps Installation Command’s Regional Exercise Team-East. “Fortunately, these incidents don’t happen on a regular basis, so you have to take any opportunity to train when you can.”

Members of Parris Island’s Fire and Emergency Services also responded to provide medical triage and care and exercise their interoperability with their law enforcement counterparts.

After the exercise, officials will review the lessons learned and apply any necessary changes to ensure Parris Island is as safe as possible.

“That’s why we train,” said Michael Keller, the Parris Island Fire Department’s assistant fire chief of operations and on-scene incident commander during the exercise, “so that when the tragic and unexpected happen on base, we’re ready.”