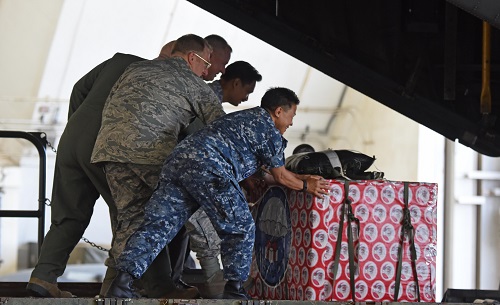 DECEMBER 6, 2016, ANDERSEN AIR FORCE BASE, Guam (AFNS) – Military members from the U.S. Air Force, Coast Guard and Navy, with international support from the Japan Air Self-Defense Force and Royal Australian Air Force are joining forces to airdrop and deliver donated toys, clothes, food items and other necessities to remote islands across the Pacific Ocean as part of Operation Christmas Drop 2016.

The annual training mission officially kicked off during a ceremony Dec. 6 at Andersen Air Force Base, where military leaders across the island pushed the first pallet of donated goods into a C-130 Hercules.

“I’m proud that Andersen is hosting Operation Christmas Drop,” said Brig. Gen. Douglas Cox, the 36th Wing commander. “I am happy to welcome our partners from Australia and Japan, it is wonderful to have you with us this holiday season.”

C-130s from the 36th Airlift Squadron at Yokota Air Base, Japan; RAAF; and Japan Air Self-Defense Force will be flying over the Pacific to airdrop goods to the islanders. More than 45 airmen are participating from both the RAAF and the JASDF.

Sixty-five years in the running, Christmas Drop is the Defense Department’s longest-running humanitarian airlift operation. The tradition began during the Christmas season in 1952 when a B-29 Superfortress aircrew saw islanders waving at them from the island of Kapingamarangi, 3,500 miles southwest of Hawaii. In the spirit of Christmas the aircrew dropped a bundle of supplies attached to a parachute to the islanders below, giving the operation its name. This year brings together three nations, three corporate sponsors and three U.S. military branches. Today, airdrop operations include more than 50 islands and thousands of people.

“It feels great to give back no matter what background you come from,” said Capt. Aaron Bowens, from the 734th Air Mobility Squadron and an Operation Christmas Drop organizer. “It’s also a great training opportunity because everything we do now for the drops is useful in the real world.”

More than 11 months of planning and preparing went into the operation, Bowens said. The Operation Christmas Drop volunteers at Andersen AFB and Yokota AB raised more than $52,000 from fundraisers and collected more than $20,000 in donated goods to aid in the humanitarian mission.

Military and civilian volunteers loaded 30,000 to 40,000 pounds of clothes, rice, fishhooks and other necessities into large-capacity boxes, before Airmen weighed and secured the boxes in preparation for delivery.

Twenty-two sorties are scheduled to be flown, covering more than 50 islands, where 140 boxes of donated goods will be dropped.

Even though military cargo aircraft are much louder than Santa’s sleigh, they are just as ready to bring joy to the island families.