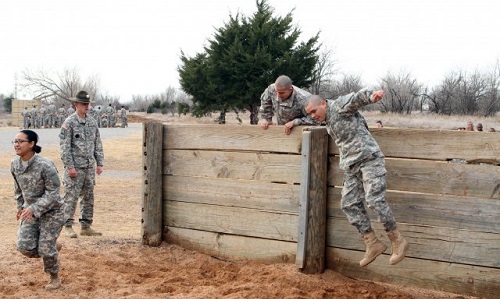 JUNE 6, 2016, WASHINGTON (Army News Service) – This summer, the Army expects to begin administering the Occupational Physical Assessment Test with new recruits. The OPAT is currently being evaluated at a select number of recruiting stations around the Army. It involves four physical fitness tests that together measure a future Soldier’s muscular strength, cardiorespiratory endurance, and lower body and upper body explosive power. The four tests include the standing long jump, the seated power throw, the strength deadlift and the interval aerobic run.

The OPAT is meant to help the Army place recruits into the military occupational specialties to which they are most suited.

But right now, said Dr. Whitfield East, a research physiologist with the U.S. Army Center for Initial Military Training, proponents of individual MOSs have not identified all the specific requirements for their career fields that can be matched against a candidate’s performance on the OPAT. More granularity on specific MOS requirements may come later, he said.

Instead, he said, MOSs have been grouped into “buckets” that require similar levels of physical performance.

“Every (future) Soldier entering the Army will take the OPAT, and will qualify at one of three levels for different demands of MOSs,” East said. “We’ve created these buckets of MOSs, the highest or very-high demand, significantly high demand, and moderately high demand. It’s important that we continue to focus on the fact that even the third bucket requires Solders to be able to do the high physically demanding warrior tasks and battle drills and common Soldier tasks. So it’s still a relatively high-demand, even at the baseline for Soldiers.” Being a Soldier is a physically demanding task, as any MOS and any duty position may need engage in combat operations.

With the ASVAB, recruits who want to get into a specific MOS but who don’t qualify for it based on their results, can take the test again. Those recruits will typically go on-line to practice or buy a study book for the ASVAB and brush up on the skills the test evaluates: reading skills, math skills, and mechanical skills, for instance. When they re-test, a higher ASVAB score can mean the number of opportunities for them in the Army increases.

“I can tell you over a 30 to 90 day period, we can see significant improvement in physical capacity, based upon training,” East said of the possibility of improvement on the OPAT.

“We’re going to have a significant number of young people who are going to struggle a bit with one or more of the events,” East said. “So the whole intent of this is to produce an individual with the physical capacities in the three major domains we’re looking at: the strength, the cardiorespiratory endurance and the explosive power. We fully expect individuals to take this as somewhat of a wake-up call — even if they pass the first time — to actually train, or develop a training program, or continue to train before they ship to initial entry training.”

East said the OPAT will not only help the Army place Soldiers where they can do best, but it will also help ensure those Soldiers are able to make it all the way through the Army’s accessions pipeline, without becoming an attrition casualty before they even get started in their careers.

“This is going to allow us for the first time to establish some minimal physical capabilities to enter the Army,” he said. “That’s the first thing. To reach those minimal physical capabilities, it may well require young people to do some type of readiness training to establish that fitness foundation. That’s going to be a huge plus relative to the injury and attrition rate in IET. And some for those injuries are catastrophic.”