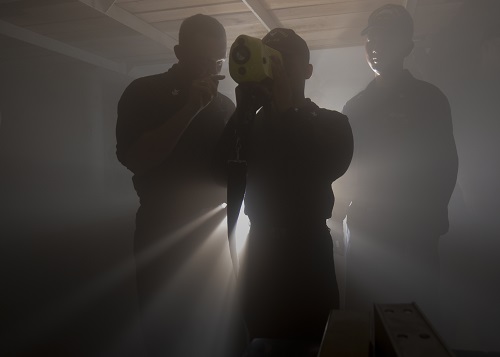 MAY 16, 2016, PACIFIC OCEAN (NNS) – Sailors and Military Sealift Command mariners aboard the submarine tender USS Frank Cable (AS 40) worked together to improve at-sea readiness for emergency-response situations while underway, May 13.

MSC Mariners and Navy Sailors participated in drills as part of a shipwide effort to ensure the crew is prepared to respond to emergencies that may happen in an operational environment.

“We are the first ship integrated with MSC mariners and Navy Sailors to this magnitude,” said Damage Controlman 3rd Class Wesley Blankenship, a native of Marion, Ohio, assigned to Frank Cable and the first responding team leader. “We are battling two different standards of damage control and trying to make both standards become one; the Frank Cable standard. Because of our differences, drilling and training are important so we can create that Frank Cable standard.”

MSC’s quick response team is designated as the ship’s first response team to all casualties, followed by an initial attack team provided by whichever repair locker, MSC or Navy, is manned and ready first, then dispatched by damage control central to combat the scene. Since initial and following attack teams can be either Navy or MSC, integrated training, drilling and communication are all important to practice to become muscle memory.

“There are things you can’t teach in a classroom environment,” said Blankenship. “These drills are important because it gives me a chance, and my fire party, to trust in each other and understand how we all are going to react and get the job done.”

“Running these drills at sea adds to the realism,” said 3rd Mate Darrel Tracy, of MSC. “When something happens, we aren’t going to be tied up in port, we are going to be underway. Drills like this help to mentally and physically prepare us for any disaster.”

Frank Cable leadership encourages Sailors and mariners to educate each other on damage control, and communicate and embrace each mission with the attitude of “one ship, one crew.”

“This crew has done an exceptional job preparing the ship for our upcoming deployment,” said Capt. Drew St. John, Frank Cable commanding officer. “Facing the ship’s first deployment in more than 14 years, the crew, both MSC and Navy, have worked tirelessly over the past few months to reach this point. I have complete confidence in the ability of each and every Sailor and mariner, and am proud of all they have accomplished.”