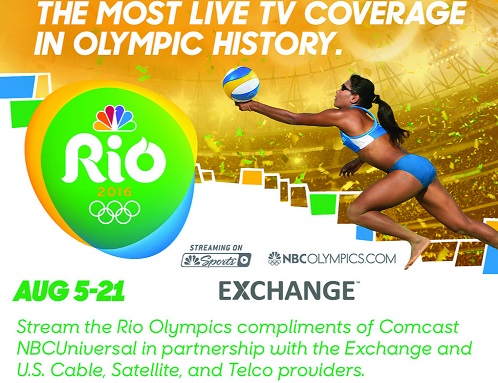 AUGUST 5, 2016, DALLAS (AAFES) – This year, for the first time, U.S. service members worldwide will have access to streaming NBC Olympics live coverage of the 2016 Rio Olympics from their desktop and personal devices.

The benefit is being provided at no cost to those who are currently serving in the U.S. military or retired military members by Comcast NBCUniversal in partnership with the Army and Air Force Exchange Service and U.S. cable, satellite and telco providers.

NBC Olympics will stream 4,500 hours of coverage, including live streaming all competition, as 10,500 athletes from 206 countries compete in 35 sports from Aug. 3-21.

“We’re excited to partner with Comcast NBCUniversal to deliver the Olympics to service members and their families, wherever they are called to serve,” said Tom Shull, who serves as the director and chief executive officer of the Exchange. “Go USA!”

Retired Army Brig. Gen. Carol A. Eggert, serves as vice president of military and veteran affairs at Comcast, said the Olympics is a global, unifying event, and that it’s fitting that coverage of the competition be made available to service members.

“We think it is extremely important to support our employees who are veterans or members of the National Guard and Reserve and the military community as a whole,” Eggert said. “We are thankful to the Army and Air Force Exchange Service for working with us to deliver the excitement of the Olympics to the military community, no matter where they are located.”

To watch, service members will access NBC Olympics’ digital coverage from their computers or personal devices by visiting NBCOlympics.com or the NBC Sports app and choosing the Exchange as their service provider.

When Comcast NBCUniversal offered the service, a collaborative team including the Defense Media Activity, Defense Information Systems Agency, the Exchange and DHI Telecom (an Exchange internet, mobile and IPTV provider) swung into action to develop the technical solution required.

Additional information will be available on shopmyexchange.com. To see a day-by-day list highlighting events to watch, go to NBCOlympics.com.

In addition to the streaming content, the American Forces Network, or AFN, will also offer extensive NBC Olympics’ broadcast and cable coverage on its television services for the overseas American military communities around the world.

“Once again we are extremely appreciative of the International Olympic Committee, its broadcast partners around the world, and to NBC Olympics for their excellent and extensive coverage of the 2016 Olympic Games being made available to America’s military communities around the world,” said Larry Marotta, who serves as television director of American Forces Network.

The opening ceremony of the 2016 Rio Olympics will air, Aug. 5, on NBC. Competition begins two days earlier on Aug. 3, with women’s soccer on NBCSN and USA Network. The Games conclude on Aug. 21, with the closing ceremony on NBC.

Viewing requires a shopmyexchange.com account. Due to broadcasting regulations, NBCUniversal is only allowed to show NBCUniversal Sports content on the internet in the United States and U.S. territories. Users outside of these locations will be able to access content on a U.S. military base, and only on previously approved internet ranges.