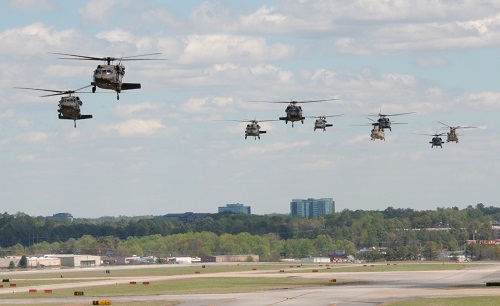 Over two years of planning, immense amounts of hard work and approximately 9,000 personnel came together in the culminating event conducted March 23 to 31. The Georgia Department of Defense and the Georgia Emergency Management and Homeland Security Agency teamed to co-host Vigilant Guard 17. United States Northern Command, in conjunction with the National Guard Bureau, sponsored the exercise.

“The purpose of this large-scale and comprehensive exercise is to simulate a real-world natural disaster in order to improve cooperation among local, state, and federal stakeholders in preparing for emergencies and any sort of catastrophic event,” said Georgia Governor Nathan Deal.

More than 50 federal and local agencies joined the Georgia Department of Defense along with units from six other states for a series of real-world training scenarios during Vigilant Guard 17.

Everything the Georgia Department of Defense does is for, with and through its interagency partners, said Brigadier General Tom Carden, commander of the Georgia Army National Guard.

This is the first time the state of Georgia has ever hosted a Vigilant Guard event, Deal said. This exercise is the largest Vigilant Guard event conducted in its history. Georgia’s Homeland Security Task Force has been in the event planning process since 2015.

In that time, the state of Georgia and neighboring states in the southeast experienced real-world emergencies, from flooding in South Carolina to Hurricane Matthew’s impact along the coast. A state of emergency was declared in six Georgia counties during Matthew, but under the scenarios during the training exercise, 19 counties were in a simulated state-of-emergency.

Among the scenarios run during the exercise, which was meant to enhance readiness for situations that could arise as a result of a natural disaster, were collapsed building search and decontamination missions, search and rescue training, maritime response missions, aerial firefighting, mass-casualty medical evacuation training, cyber-attack defense and more.

“The purpose of this exercise is to simulate an event that exceeds our capacity to respond and stresses our systems to the point we have to ask for assistance outside the state,” said Maj. Gen. Joe Jarrard, Adjutant General of Georgia. “That assistance could come in the form of other Guardsman from other states, active duty forces from around the country, as well as additional assistance from federal agencies and other states.”

Participants in the exercise learned to coordinate effective disaster response. As a result, in the event of a catastrophe, agencies engaged from national to local levels should be better prepared to plan, communicate and take action to protect the citizens of the United States.

“To know that we have the Guard standing behind us is great,” said Tim Holloway, a manager for Columbia County Georgia Roads and Bridges Department. “We look forward to working together, whenever it may be.”