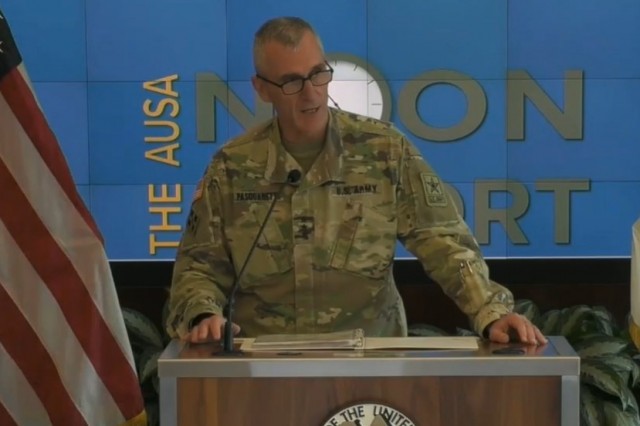 NOVEMBER 20, 2020 – The Army’s G-8 said he has high hopes for modernization efforts heading into the next year, despite potential budget cuts that could impact them as well as future end strength and force readiness.

“We’re on the path to deliver the capabilities our Soldiers require to fight and win,” said Lt. Gen. James Pasquarette during an Association of the U.S. Army Noon Report webinar Wednesday.

In previous years, Army modernization has come with its share of hold-ups and headaches. But this time, Pasquarette believes the force’s current efforts are much more promising than past attempts.

The general, who has now served two years in his role as G-8, said he was confident that if topline cuts were required, leaders would continue funding top modernization capabilities.

“[The Army secretary and Army chief of staff] have both stated that we must modernize the Army,” Pasquarette said. This is a “once-in-every-40-years opportunity, and it’s against a valid requirement.

In addition to having support from senior leaders, another helpful source for modernization programs has been the U.S. Army Futures Command. Established in 2018 with a sharp focus on meeting modernization goals, he said this centralized effort has brought a streamlined approach to modernization. And having a four-star general “intimately involved in the modernization effort” has assured its success.

“Since the end of the Cold War, when the Army has been faced with a significant downturn in the top line, the easy button has been modernization,” he said. In other words, when previous budgets have taken a hit, modernization was the first to be cut.

“[Army leaders] have turned down the modernization dial in order to preserve end strength,” he said. “And whatever was left over after that, we put into readiness to ensure we had the ability to fight.”

To him, hitting “the easy button” is just the easy way out for that moment in time, he said. Now things are different: there is no easy way out.

“The equipment we have today is what we need to deter, and if necessary, fight and win against high-end adversaries” like China and Russia, he said. And if it comes time to cut spending “I believe we’ll continue to fully resource top priority” efforts like Army Futures Command’s cross functional teams.

Despite challenges, “we’re on a path to deliver the next-generation capabilities our Soldiers require, and if necessary, to fight and win against near-peer adversaries in the future,” he said.

The Army’s No. 1 modernization priority, the long-range precision fires portfolio, is on track to deliver the force’s long-range hypersonic weapon, he said. Earlier this year, in a joint effort with the Navy, the Army successfully test fired a hypersonic missile and plan to have a battery of prototype hypersonic weapons fielded by fiscal year 2023.

When it comes to mid-range capabilities, the Tomahawk, a low-flying subsonic missile, and SM-6, a supersonic, high-altitude missile, are both capable of “striking maritime and land targets at range,” he said, adding they are on track to be fielded by fiscal 2023.

The Extended Range Cannon Artillery, or ERCA, which is capable of firing rounds more than 40 miles, is also on the horizon, he said, adding that a follow-on variant with an auto-loader is in the works, too.

Other modernization programs are also in various stages of implementation. For example, next month the Army plans to release a request for proposal for the Optionally Manned Fighting Vehicle.

Pasquarette assured the virtual audience “we’re on a positive path” to modernization as the Army continues to “revolutionize how we fight where it matters most — at the squad and platoon levels.”

But modernization is not cheap, especially when facing a flat budget.

For the third year in a row, senior leaders have conducted “night court” processes across Army portfolios to realign funds to modernization efforts, he said.

The budgetary review strategy, which was most recently conducted in the spring under COVID-19 conditions, helped leaders realign billions of dollars, he said.

Pasquarette, who manages the night court process, did not disclose an exact dollar amount or how many programs were cut during the 2022 program review, but he said this year’s findings were comparable to last year’s deep-dive.

Even though the future of the Army’s spending is “a bit hazy,” he said, Army leaders and lawmakers are making the right choices to keep modernization efforts on track.