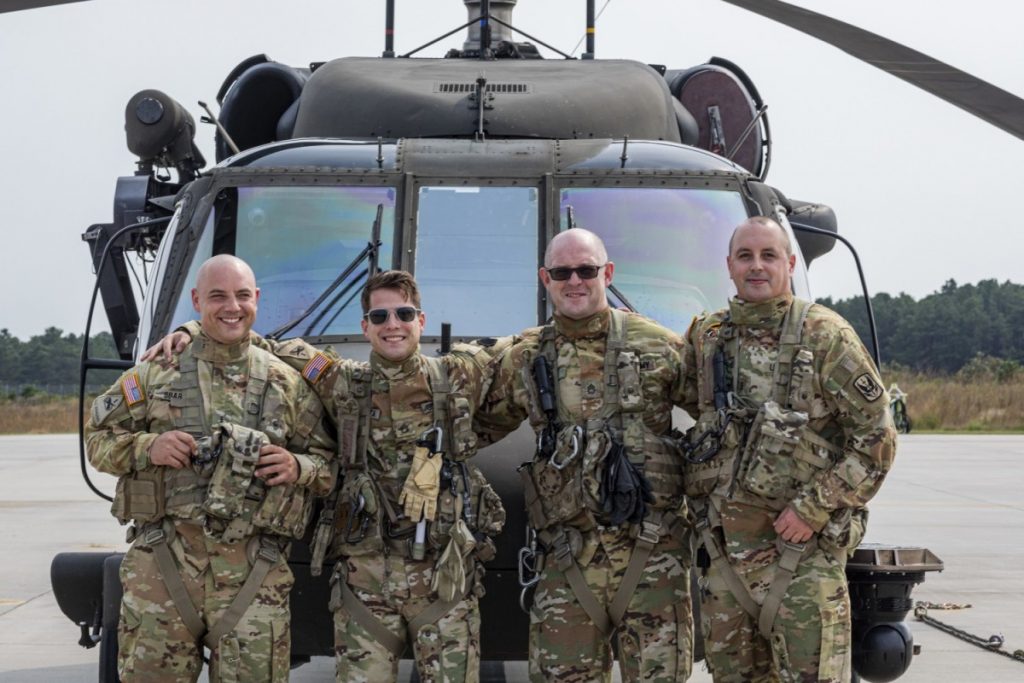 SEPTEMBER 17, 2021 – Hurricane Ida caused extensive damage as a Category 4 Atlantic hurricane in Louisiana and, even after it was downgraded to a post-tropical cyclone, created catastrophic flooding in the Northeast.

As the hurricane was making landfall, planning was underway at the New Jersey Army National Guard’s Army Aviation Support Facility to either prepare for sending troops to assist in the South or support local authorities with weather-related events in New Jersey.

A request for help came early the morning of Sept. 2: Motorists were stranded in rising floodwaters near Somerset, N.J.

Maintenance teams, crew chiefs, and pilots with Detachment 2, C Company, 1-171st General Support Aviation Battalion (MEDEVAC), and the 1-150th Assault Helicopter Battalion rushed to the facility, located on Joint Base McGuire-Dix-Lakehurst. Within two hours, they had a hoist-capable UH-60L Black Hawk helicopter off the ground, searching for survivors.

It wasn’t long before the crew of ROGUE20 saw their first flood victims.

“This was the first actual hoist rescue ever done by the New Jersey Army National Guard in New Jersey,” said Chief Warrant Officer 3 Quentin Hastings, a Black Hawk pilot with the 1-171st. “We had gotten word that there were people in the water on top of their cars, and in just a few minutes, we started finding people.”

Hastings and his copilot, Chief Warrant Officer 3 Albert Sbarro, took turns piloting and spotting for threats to the aircraft.

The ROGUE20 crew had to navigate several obstacles to put their flight medic into position, including high-tension power lines and rushing water.

“We were only searching for about four or five minutes when we saw cars in rapid moving water that boats couldn’t reach,” said Staff Sgt. Michael Toth, a flight medic with the 1-171st. “It was tricky because we normally train from 90 to 100 feet, but because of the downwash from the helicopter, we did the hoists from between 140 to 150 feet. It was quite a ride.”

ROGUE20 picked up five stranded motorists with the hoist and four more by landing on a bridge surrounded by water.

While Toth was riding on the hoist, it was operated by Black Hawk crew chiefs Sgt. 1st Class Timothy Witts and Staff Sgt. Anthony Marotta.

“I was glad to be a part of it, and it was a great feeling to see the looks on the faces of the people we helped pull up,” said Witts. “The first woman we got on board had been on her car for about 10 hours, so she was exhausted and relieved.”

The ROGUE20 crew flew the nine rescued people to a triage site set up with ambulance crews on high ground.

“We stood up the medevac mission, and less than two years after that we deployed to Afghanistan and had a successful combat tour for nine months in-country. Then we came back home and have been training for this exact scenario,” said Hastings.

“They train for this every day,” said 1st Lt. Larissa Fluegel, commander of Detachment 2, C Company, 1-171st. “The fact that they used their skills to benefit the people in our own communities is really incredible. The National Guard is Always Ready, Always There.”