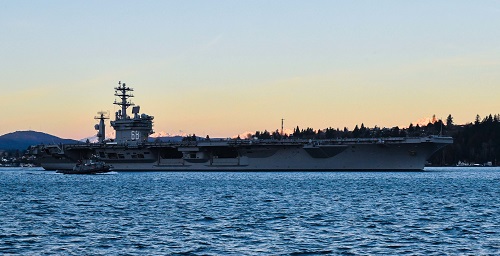 FST-M was the first opportunity for all of CSG-11 to work together in preparation for their upcoming Composite Training Unit Exercise (COMPTUEX).

FST-M is a computer-assisted, multi-phased event which provides opportunities for joint services to execute warfare and unit commanders’ mission-essential tasks in an in-port training environment.

Nimitz and the participating Sailors simulated conducting a major operation with the support of another CSG and other ships during multiple exercise scenarios. These practice situations tested the Sailors of combat systems and operations departments, as well as the strike group’s ability to perform in a real-world environment.

FST-M is designed to be similar to COMPTUEX, but is accomplished in port vice underway.

“The idea is that we are conducting war games and operations via simulator as we would in the actual area of operation,” said Lt. j.g. David Nygren, a tactical action officer aboard Nimitz and native of Dayton, Oregon.

The exercises gave Sailors from various commands and ratings the opportunity to work together for the first time, and learn how they work both independently and together to accomplish a mission.

“It made me more aware of who I would be working with and how I would be working with them,” said Intelligence Specialist Seaman Kai Shields, a native of Honolulu and a database manager during the FST-M exercise. “You would be sitting in sort of a melting pot of different rates, shooting information at each other, and we would have to compile that information, make an assessment from what’s going on in the battle picture, and then respond.”

During FST-M, simulated exercises were conducted in the U.S. 5th and 7th Fleet areas of responsibility and were intended to prepare the Nimitz CSG for an upcoming 2017 deployment.

“We started off with a scenario in the 5th Fleet — just normal operations to get a feel for how things work over there,” said Nygren. “Later on we were doing 7th Fleet operations, which were more like traditional war gaming.”

Nygren said simulated training may not fully prepare Sailors if a situation presents itself, but it can help with making decisions based on knowledge received from the training.

“FST-M is an important and aggressive training exercise,” said Shields. “Being my first time actually managing something like that, it was probably one of the most stressful experiences I’ve been through in all of my training.”

Nimitz is currently underway in preparation for the Board of Inspection and Survey (INSURV) leading up to COMPTUEX and an upcoming 2017 deployment.