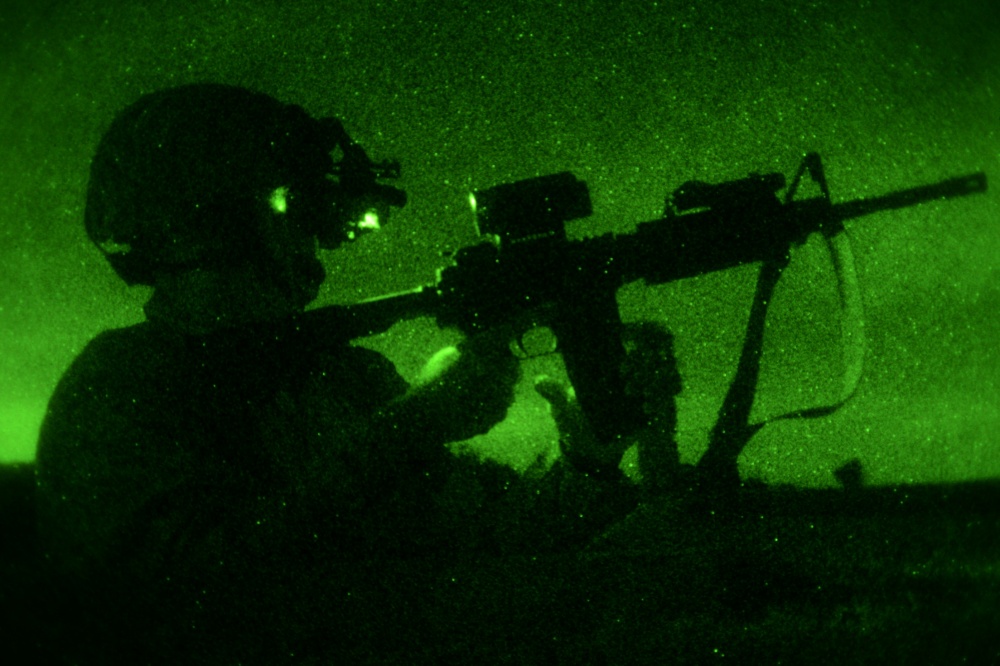 DECEMBER 5, 2017, Joint Base San Antonio – Camp Bullis, TX – The military has many axioms, but one that equates to triumph on the battlefield is “we own the night,” which is uttered by Department of Defense service members at home and abroad. The phrase derives from the overwhelming advantage provided by the United States military’s night vision capabilities.

Part of the success is the ability to conduct realistic training for night operations. But what happens when the training is skewed?

“While training with night vision goggles, service members had to avoid looking in a specific direction from one of the biggest light sources outside of the training area, which interfered with the night vision’s capabilities,” said Jim Cannizzo, the Administrative and Civil Law Advisor for U.S. Army, Camp Stanley Army Material Command and Retained Army Functions at Fort Sam Houston and Camp Bullis.

“The reason [the quarry] is the biggest source of light is due mainly to its proximity. The quarry is only 2,500 feet from the primary area where they do the night vision goggle training along the southern area of Camp Bullis at the locations called Mama Bear, Papa Bear and Baby Bear, which are three hilltops,” said Cannizzo. “Mama Bear is where [the service members] conduct most of the night vision training.”

Cannizzo had to witness the effects on the quarry himself. He described looking into the night vision goggles (NVGs) and only being able to see a bright blur versus a well-defined area.

After witnessing the affects the quarry’s lighting had on training Cannizzo decided to enlist help from the management team at the quarry to resolve the lighting issue.

“I realized [the personnel at Camp Bullis] could probably engage with the management team at the quarry; we worked with and resolved issues with them in the past,” said Cannizzo. “So, I lined up a meeting with them at the end of August 2017.”

While at the meeting Cannizzo was informed that the quarry was already grandfathered by a 2009 light ordnance and weren’t required to make any adjustments to their lighting. However, the quarry’s management team agreed to visit the site at night to witness the affects the quarry has on the training environment.

“They witnessed the lights’ impact on the training environment, which made any night training extremely difficult,” said Cannizzo.

“I didn’t expect our lights to be this bright or affect the training this much,” said Rick Dockery, the electrical manager for Central Texas Aggregates at Martin Marietta Quarry. “I knew then we needed to look at putting shielding on our lights, so that it doesn’t interfere with training.”

From the initial visit to the training site, the quarry’s management made a decision to shield the lights, which would help to only illuminate their area and lessen the lights onto Camp Bullis’ training area. And, three months later, the project of shielding the lights was complete.

Both parties came together for a final site visit to Camp Bullis’ Mama Bear training area Nov. 28 to see if the shielding worked.

Cannizzo recounted the expressions from the quarry’s management team, “Wow, this is amazingly better.”

“Although the quarry didn’t have to shield the lights because they were already grandfathered, I’m glad we were able to work together, yet again, to provide service members with a better training environment,” said Cannizzo.

“I’m just happy we could help support because part of our motto is ‘being good neighbors’ and at the end of the day that’s what it is all about,” said Dockery.

Cannizzo added, “We are better than our adversary at operating at night. We not only have the sophisticated technology to conduct night operations, but we have the effective training to continue saying ‘we own the night.’”