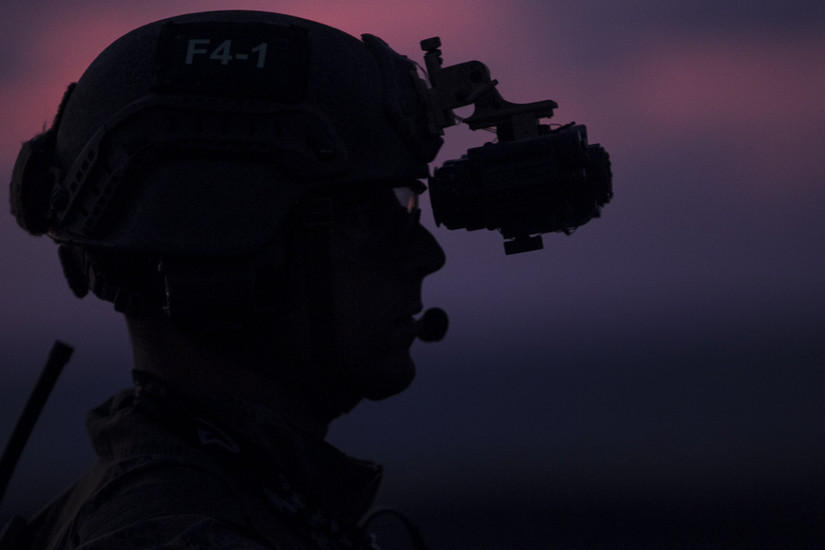 APRIL 20, 2018, Marine Corp Base Quantico, VA – Marines will have better situational awareness on missions in dark areas thanks to new night-vision goggles.

The BNVG II includes a binocular night-vision device and a clip-on thermal imager, or COTI. The BNVD amplifies the small amount of existing light emitted by stars, the moon’s glow or other ambient light sources and uses the light to clearly display objects in detail in very dark conditions. The COTI uses heat energy from the Marine’s surroundings to add a thermal overlay that allows the image to be viewed more clearly, helping Marines with situational awareness in conditions with little to no light.

Enhanced Vision
“The BNVG II helps Marines see enemies at a distance, and uses the COTI to detect ordnance or power sources for an explosive device that gives off heat,” said Nia Cherry, an infantry weapons program analyst. “The COTI intensifies Marines’ ability to see anything in dark conditions, rain, fog, dust, smoke and through bushes that the legacy binoculars couldn’t.”

The BNVG II is a follow-on to the legacy, battle-proven AN/PVS-15 binocular, but offers more features, such as the COTI, for increased survivability. The BNVD component is a compact, lightweight, third-generation, dual-tube night -vision goggle with an ergonomic, low-profile design. It offers superior situational awareness compared to the AN/PVS-15 used by reconnaissance Marines and the single-tube AN/PVS-14 monocular night-vision device used throughout the rest of the Marine Corps, officials said. It mounts to the enhanced combat helmet and may be used individually or in conjunction with the COTI.

“In March, we held an exercise in San Diego where Marines provided positive feedback on their ability to easily maneuver with the goggles,” said Joe Blackstone, optics team lead in infantry weapons. “The depth perception provided by the BNVG II enhances precision and increases the operator’s survivability while on missions with limited lighting.”